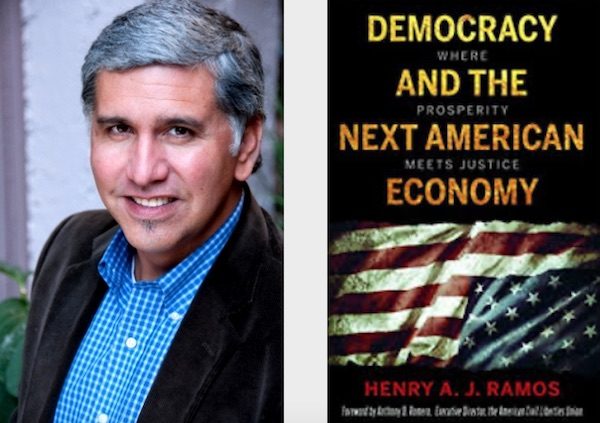 Henry A. J. Ramos and his new book.

–In his new book, “Democracy and the Next American Economy,” Henry A. J. Ramos states that “America is facing its greatest challenges since the civil rights era.” Ramos, who is a resident of Paso Robles, a social commentator and activist, and current Director of Studios on the Park, has written a book chock full of reasons why he feels this way.

Ramos has an extensive background in social justice issues having served as past Executive Director of Equal Voice Action, a national family membership organization of working and striving families seeking enhanced political and economic empowerment, past President and CEO of the Insight Center for Community Economic Development, one of the nation’s leading applied research centers on issues of economic mobility and justice, and is currently a Principal of Mauer Kunst Consulting, a private research and advising firm working with social investors and public interest nonprofit groups. He has served on many nonprofit and public boards and was an appointed member of the California Community Colleges Board of Governors.

His latest book reflects his attention to accurate research and throughout there are pages of endnotes detailing where the reader can find more information on the organizations, movements, publications, films, and more that he writes about.

In the Foreword by Anthony D. Romero, Executive Director of the American Civil Liberties Union he states that Ramos’ book “is an important contribution” to the endeavor of accelerating “emerging new models in democratic self-governance and economic opportunity. It offers a compelling analysis of our present circumstances and a roadmap to a more promising future based on nascent civic and economic innovations that simultaneously honor the spirit of our nation’s founding principles, while portending wholly new modalities for realizing our best potential going forward. . . Ramos does not advocate for change on the margins or in increments. Rather, he is calling for a significant reordering of American politics and economy to meet the imperatives of our nation’s formative promises in new and unprecedented ways during the coming generation.”

Ramos writes in his Preface about getting the government back to one that had first and foremost put the longer-term interests of people and nature first rather than capital and privilege. Ramos does not blame only the conservative Republican movement but explains that Democrats are just as much to hold responsible for the political and economic situation we find ourselves in. He mentions President Clinton’s North American Free Trade Agreement, Welfare Reform, and the Federal Crime Bill. He states that Clinton’s aim was to move the Democratic Party to the center. He says that wow we find that center no longer holds, and we are floundering.

In the chapter “Rising Costs of Inequality” he talks about how the misguided policy of favoring the wealthy impacts our standard of living and quotes urban economy expert Richard Florida who says “wealth and income inequality in major American cities is now equivalent to levels of inequality in many of the world’s poorest nations.” He also mentions economist Aaron Pacitti who calculated the price tag of recent American economic decline stemming from the Great Recession (2008) at over $27,000 per household. Pacitti states that “for each worker, the cost of the recession was $2,722 per year, adjusted for inflation. That means for the decade since December 2007, the average worker became $27,220 poorer in terms of the goods and services they could have purchased, or in terms of income.”

Ramos covers how religion is being used to foster inequality and how our present economic situation fosters injustice as to race, gender, and class. He writes of our current economy being the product of centuries-long thinking and practicing Democratic Capitalism that speaks to the individual’s primacy in society and man’s command over nature and capitalism being the major driver in the world’s commerce and development. This, he states, helps to justify the widespread exploitation of people and of nature with the perception that it is “good for the majority.” This justification “often took on [the] Christian religious notions of God’s will.” Capitalism, he says, “wrapped itself in morality” and ignored the free market’s many transgressions. “In America,” he states, “under the banner of Manifest Destiny, these included, among other things, the subjugation of women and African slaves as chattel, the genocide of indigenous tribes, the taking of Mexican lands and various Caribbean and Asian territories for expansionist purposes, the general exploitation of wage laborers of all backgrounds, and the rampant exploitation of nature in the quest for development and profit.”

Ramos questions whether the American Dream is obsolete and speaks about changing the paradigm. He reminds us that during President Obama’s first term in office he often reminded voters that “the definition of insanity is doing the same thing over and over again and expecting different results.” However, this is just what we have been doing and it appears we may continue to do this. It’s been happening in decades in America, Ramos states, when it comes to our economic policy-making, “the cycle has become painfully predictable.” He writes, “Every decade or so we experience a nasty recessionary setback, each one seemingly deeper and longer than the last one, and each one leaving more and more people behind.”

While this picture sounds bleak, Ramos is quick to include many existing organizations, non-profits, groups, and others already working on bringing an improved social justice to the forefront of American life. And he does not leave us with only the problems but spends a good portion of the book outlining and explaining concrete solutions to our problems. Some of the things he brings to light are worker-owned businesses, such as cooperatives, and social enterprises that profit share with their employees, new models of business for the common good, building toward a green economy where he finds an important transition taking place with the slow, but steady recognition that global climate change is real and threatening.

Ramos sums up in the book how we can move forward with changes and how people will need to do more together utilizing consensus building. He writes of us deepening our trust and our common bonds. He especially points out that there is power in small grassroots community groups and that nothing changes from the top down but always from the bottom (community) up. Ramos feels that the future cannot rely on the major political parties as they are now and must instead rely on activists to hold them accountable on demands.

The book Democracy and the Next American Economy: Where Prosperity Meets Justice is available on Amazon and from Arte Publico Press, University of Houston, 4902 Gulf Fwy. Bldg. 19, Room 100, Houston, TX 77204-2004.

An interview with Henry A. J. Ramos will take place Saturday, Feb. 29, on the program “Peace Rocks” hosted by Ruth Ann Angus and Yes We Can Peacebuilders at 107.9 FM in Paso Robles and 97.3 FM on the coast from 1 p.m. to 2 p.m. Also available live at www.centralcoastradio.org and post-production online for two weeks.

Henry A. J. Ramos is a California native and received his bachelor’s degree with honors from the University of California Berkeley, an MPA (Master’s in Public Administration) from Harvard University, and a JD (Juris Doctorate) from UC Berkeley Law School. 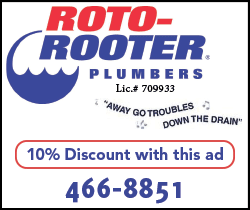