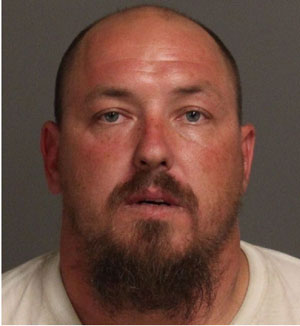 Detectives with the San Luis Obispo County Sheriff’s Narcotics Unit arrested 34-year-old Chad Fowler of Paso Robles for possession of heroin for sale, possession of methamphetamine for sale and one enhancement for being in possession in excess of more than a kilo of a methamphetamine. The incident was Thursday at about 4:15 p.m.

During a follow-up investigation into an unrelated incident at a residence located in the 3000 block of Creston Road in Paso Robles, investigators discovered a large amount of narcotics hidden in a storage unit.

In a cooler in the storage unit, investigators found one and a half pounds of methamphetamine that was divided into 11 individual plastic bags that were packaged for sale. In another cooler, two bricks of a controlled substance were found.

Authorities believe that substance is methamphetamine, pending analysis. In total 4.5-pounds of methamphetamine were seized. Also discovered in the storage unit, four plastic bags containing a total of 7.1 ounces of black tar heroin. Altogether, the methamphetamine and heroin have a street value of $27.000.