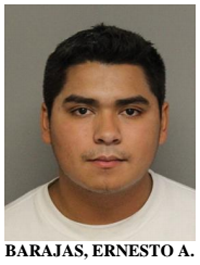 On June 14, 2016, detectives from the Paso Robles Police Department began an investigation regarding a subject in possession of child pornography, after receiving a tip from the Central California Internet Crimes Against Children Task Force.

Using this information, detectives were able to secure a search warrant for an apartment in the 3000 block of Spring Street. During the service of this search warrant on June 24, detectives seized several computers. These computers were sent to a computer forensic specialist with the Central California Internet Crimes Against Children Task Force for examination. As a result of this forensic examination, several files were located that contained both videos and digital still images of known child pornography.

Detectives interviewed the owner of the computers on July 21, 2016, at approximately 3:30 p.m. at the Paso Robles Police Department. Subsequent to this interview, detectives arrested Barajas.