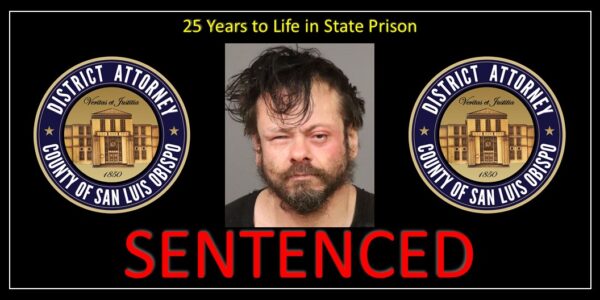 During the trial, a San Luis Obispo County jury heard evidence that on Sept. 1, 2021, Andrew William Gilbertson, 47, entered the Chase Bank in Paso Robles where he attempted to exchange money that was wet and dirty. When Gilbertson was told that a bank policy prohibited exchanging the money based on the condition of the bills, he passed a note that had been written on a Chase Bank envelope which read, “Give me all the money.”

Gilbertson then brandished what the bank teller believed to be a gun from within a plastic bag he held and threatened, “ I have a gun, who do I need to shoot?” The jury also heard evidence that Gilbertson had been previously convicted of robbery of a Bank of America in San Luis Obispo using a similar note in 2013.

On Aug.16, 2022, the jury found Gilbertson guilty of the attempted robbery. During a separate court trial, the Honorable Judge Timothy S. Covello made findings that Gilbertson had been convicted in 2015 of second-degree robbery and in 2021 of arson, both “strikes” under California’s Three Strikes sentencing law, subjecting him to a life sentence.

“Here in San Luis Obispo County, we will use every legal means to hold repeat violent offenders accountable to the maximum extent we can under California Law,” said District Attorney Dan Dow. “When California’s Three Strikes sentencing law is followed and imposed, like it is here, it sends a strong message to other would-be violent criminals to think twice or perhaps choose another county in which to commit their crime.”

The case was investigated by the Paso Robles Police Department with the assistance of the District Attorney’s Bureau of Investigation and was prosecuted by Deputy District Attorney Kristin Barnard.