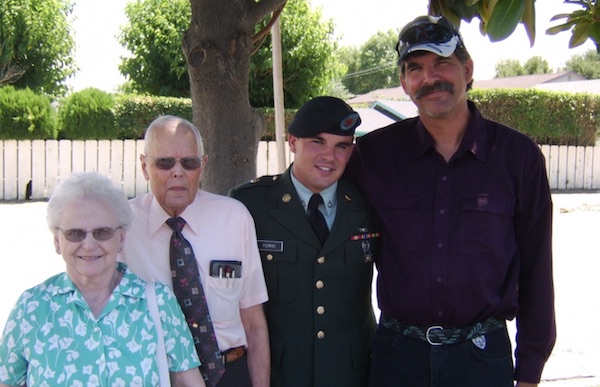 Corrie Ferrin, a private first class in the U.S. Army at the time of this photo, poses for a picture with his adopted grandparents and his father, Oct. 20, 2005, at Paso Robles, California, after returning from a deployment to Iraq. Ferrin’s grandparents played an instrumental role in his upbringing after his mother left him at infancy and his father was busy supporting what was left of his family. (Courtesy photo by Staff Sgt. Joshua Joseph Magbanua)

–U.S. Army Sgt. 1st Class Corrie Ferrin, an Advanced Individual Training senior instructor at the 1-210th Aviation Regiment and Paso Robles native, makes it a point to look after his family—whether it’s his immediate relatives or his brothers and sisters in arms.

Therefore, it wasn’t a surprise to his comrades when he was awarded Military Citizen of the Year by the Virginia Peninsula Chamber of Commerce. Ferrin was nominated for the award largely due to his volunteer efforts to take care of soldiers and their families during one of the most trying events in our collective memory: the COVID-19 pandemic.

Amidst the joy of receiving these accolades, the senior instructor made it clear that the award did not reflect his own efforts, but the efforts of his whole team—which he calls his family.

“It’s not just me, it’s the team,” said Ferrin. “It’s not about what you can do: it’s what your team can accomplish. Whenever I see someone in a time of need, I’m always out there and I always help out because I know what it’s like to not be able to make ends meet.”

When the pandemic broke out, the world as we knew it shut down. Ferrin mobilized his team to ensure soldiers and their families had what they needed. He made phone calls to check on families during the pandemic and helped deliver essential supplies to those who needed them. He also organized virtual events to ensure families were not only entertained, but also connected during a time when everyone seemed so far away. Ferrin also provided packages to members welcoming new additions to their family.

He noted that this passion for family stretches deep into his past, all the way to his infancy—when his mother abandoned him when he was six months old.

“I was born, and then my mother left me for personal reasons,” said Ferrin, who hails from Paso Robles, California. “My dad struggled to raise me. I saw him struggling until I was able to go to college and play football for a year. My dad had to work three jobs just to support me.”

Because his dad was always busy trying to earn money and keep food on the table, Ferrin’s grandparents stepped in to fill the voids. Ferrin grew especially close to his grandfather, Jay, whom he described as one of the most selfless and generous individuals he has ever known.

Jay served in the Army, and later started a teaching career, which spanned more than 40 years. He was also heavily active in his local church.

On top of this, Jay adopted three children—one of whom was Ferrin’s father.

“My dad, aunt and uncle are adopted; my grandpa adopted them,” said Ferrin. “That’s where I learned unconditional love and compassion. Grandpa and I were very close; our bond was very tight.”

Of the many lessons Ferrin learned from his grandfather, he said love and compassion were the most important.

To illustrate his grandfather’s compassion, which extended even to the simplest matters, Ferrin shared a story from when he [Ferrin] was in elementary school.

“My grandpa was my teacher in third grade,” he recalled. “He always had a lump of wood on his desk which he used as a paperweight.”

Ferrin described how his grandfather was taking a walk one day and found the piece of wood lying by the side of the road. Jay picked it up and took note of its unique shape: it looked like a heart. Jay took it home, cleaned it, glazed it with some finish and eventually brought it to school with him where it stayed on his desk.

What Jay did to that simple lump of wood illustrates what he did for Ferrin and his father: taking them from a lonely situation and helping them find a place to belong. Ferrin took this and many other lessons to heart, internalizing them and living them out so everyone else can learn them as well.

So strong were the virtues that Ferrin displayed, even his leadership took notice. This is why they nominated him to become Military Citizen of the Year.

“He is a team player who is genuinely centered on mission success and improving the organization,” Terlizzi continued. “This is evident by his extensive volunteer efforts within the organization and local community, in addition to his drive for excellence in his assigned duties.”

As for Ferrin, he just wanted to live out the love and compassion he learned from Jay.

Jay passed away more than 10 years ago, leaving some big shoes for his grandson to fill.

When Ferrin went home for Christmas last year, he rummaged through Jay’s belongings with his grandmother—when suddenly he found his grandfather’s beloved heart-shaped paperweight lying among some old Army mementos.

“I asked my grandmother if I could keep it,” said Ferrin. “She said, ‘yes, but take it with a heavy heart.’ She didn’t like letting go of things that reminded her of grandpa.”

For Ferrin, the heart-shaped piece of wood was not just a simple heirloom: it symbolized everything his grandfather had taught him and done for him growing up.

This relationship with his grandfather prepared him for his connection to his extended family in the Army. Ferrin’s humble upbringing led him to swear not to let his own family experience poverty like he did—whether or not they are related by blood.

“We all come from different walks of life,” he said. “Not everyone is from a stable upbringing. I look at it from this perspective: they joined the Army, therefore let me treat them as my brothers and sisters. Let me help mentor and guide them to a good path.”

Ferrin gazed at his grandfather’s heart-shaped paperweight while holding it in his hand. One would wonder where that old lump of wood might be now if Jay had not taken it from the wayside, brought it home and cleaned it—making it more beautiful than ever before.

That is the message Ferrin learned from his grandfather, which he now strives to pass along to everyone: have a heart, and bring out the best in your fellow people.

“My grandfather saw the beauty in things which most people would ignore,” Ferrin said. “Everyone has a story; everyone has something to bring to the table. Just because you don’t get along with someone now, it doesn’t mean they can’t be your friend, brother or sister somewhere down the road. You always have to take care of each other, because you never know when you’ll need them or when they will need you.”