Paso Robles has a new mural 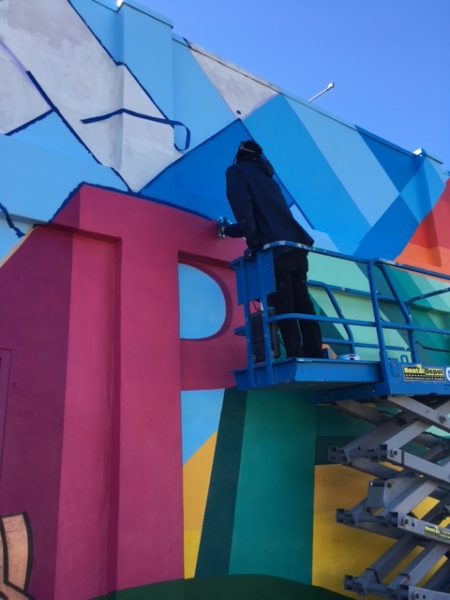 – Studios on the Park recently announced the completion of a colorful new downtown wall art mural created by artists Pat Milbery, Pat McKinney and Jason Graves. The new “Enjoy PASO” mural adorns a wall of Spring Seafood Bar & Grill on Spring Street between 12th and 13th streets. This project was made possible thanks to a Firestone Walker Brewing Company donation.

“This beautiful mural truly captures the essence of Paso Robles—including its rich history, natural beauty and agricultural heritage,” said Sasha Irving, executive director at Studios on the Park. “We are so thrilled by what Pat Milbery and his team have created for our community, and thankful for the generous support of Firestone Walker and our other community partners.” 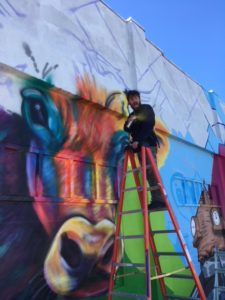 The mural features classic local scenery such as a tractor, wine grapes, rolling hills, cattle and the iconic downtown Acorn Building clock tower, all surrounding a bold, fluid rendering of the word “PASO.”

Colorado-based Milbery and three fellow artists from his So-Gnar Creative Division began painting the mural on March 1. They also enlisted the help of several young aspiring artists over the past weekend.

“This project provided phenomenal experience for our young artists,” Irving said. “It is something they will never forget.”

The origins of the mural began when Irving met Milbery and Graves while they were installing a mural in Denver. Inspired by Milbery’s work, Irving and her colleagues began envisioning a new signature mural for downtown Paso Robles.

Next, Irving approached Firestone Walker Brewing Company, a supporter of Studios on the Park, who agreed to donate funds towards the inaugural public art piece.

“We are thrilled to support local art initiatives,” said Joel Peterson, the brewery’s marketing manager. “Our roots run deep in Paso Robles—and we see this mural as an enduring investment in our community.”

Irving worked closely with the City of Paso Robles and George Shoemaker, the owner of the building that houses Spring Seafood Bar & Grill to secure the space. She also held a community meeting to seek input from neighbors and explain the project.

“This mural is a testament to collaboration and a vibrant new asset to our local arts scene,” Irving said.