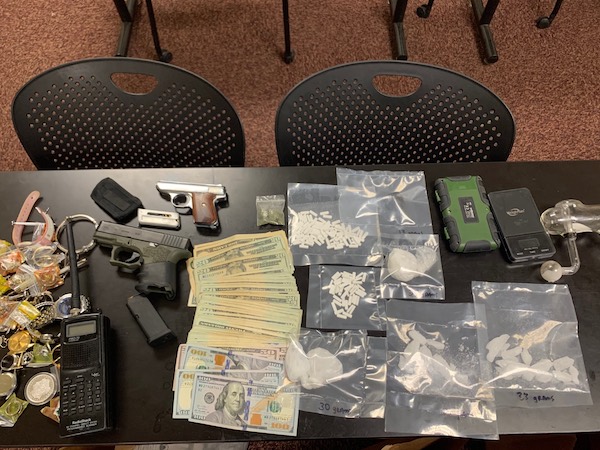 –The Paso Robles Police Department arrested multiple people at a house in the Laurelwood neighborhood in Paso Robles. They posted the following on their Facebook page, detailing the incident:

Earlier today a Paso sergeant was on patrol in the 500 block of Laurelwood. Not by chance. You see, Laurelwood is a nice neighborhood. However, a pesky resident has caused neighbors to live in fear. Constant cars coming and going. Shady folks all hours of the night. That’s the great thing about Paso. People watch out for each other. We’ve had a long history with the house as well. We know it well.

While on patrol, our Sgt saw Robert Montijo sitting in a car to the front of the house. The Sgt quickly recognized the passenger, Stephanie Dukes, as a probationer in town. Upon contact, both seemed nervous, and rightly so. You see, our Sgt noticed a pistol on the floorboard of the car. As Montijo was removed from the vehicle, we learned he was sitting on a second loaded pistol, an unserialized Glock. Bad news for Montijo.

Just as this was going down, Edward Dowless emerged from the house to see what was going on. Bad move Eddie. Dowless, a probationer, was contacted along with several others hiding in the house. They came out willingly when they heard Renzo barking. Good boy.

To the residents of Laurelwood. We are working with the owner to put an end to this house for good.