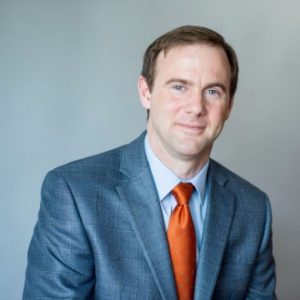 He is the eighth of the late Supreme Court Justice Antonin Scalia’s nine children. The book includes Justice Scalia’s speeches, some deeply personal, on subjects ranging from marriage and religion to sports and turkey hunting.

No one is better qualified than Christopher to provide insight into the legacy of his father who was a conservative icon, bon vivant, music lover and witty observer of law and life. Christopher began compiling the collection shortly after his father’s death in February 2016 to give non-lawyers, as well as lawyers, a fuller picture of his father and his many interests. “It was therapeutic and powerful,” Chris says of the process. “My father was such a good speaker, and his voice comes through in these speeches—his humor, his intelligence, his passion. It was like having him in the room again.”

Barnes and Noble will be selling and Christopher will be signing copies of Scalia Speaks: Reflections on Law, Faith, and Life Well Lived at the luncheon meeting.

Christopher Scalia’s book reviews and political commentary have appeared in USA Today, The Wall Street Journal, The Washington Post, The Weekly Standard, the Times Literary Supplement and elsewhere. During the weeks leading up to the confirmation hearing on Judge Brett Kavanaugh, Mr. Scalia appeared often on Fox News to talk about the impact on family of going through the confirmation process (he was just 10-years-old when his father was nominated by President Reagan in 1986) as well as to discuss the current political climate.

With an emphasis on Sir Walter Scott and other Scottish Romantics, Mr. Scalia taught English for eight years at the University of Virginia’s College at Wise. He published enough to secure tenure, got along well with his colleagues and enjoyed opening bright, young minds with the help of great books. While he loved his years in academia, he changed careers in 2015 and currently works at public relations firm in the Washington D. C. area. He lives in Virginia with his wife Adele and three young children.

Scalia Speaks: Reflections on Law, Faith, and Life Well Lived, co-edited by Christopher and one of the Justice’s former law clerks Edward Whelan, is an anthology of dozens of Justice Scalia’s speeches, some published for the first time, that range in topic and tone from characteristically philosophical to surprisingly personal. Nominated to the Supreme Court of the United States by President Reagan in 1986, Justice Scalia’s originalist interpretation of the Constitution and his masterful articulation of his views made him a formidable presence on the bench, a seat he held for nearly thirty years until his death in Feb. of 2016.

Paso Robles Republican Women Federated is honored to have Christopher travel across the country to be their guest speaker at the Paso Robles Inn Ballroom. The public is welcome. Prepaid reservations are required. The cost is $24 and includes a buffet luncheon. Email info@prrwf.org with your name and phone number by Oct. 7, and a club member will contact you.