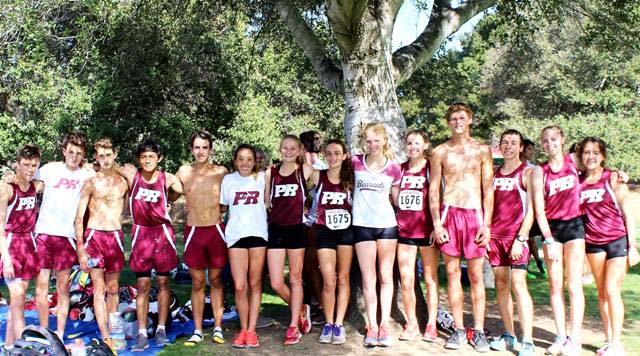 Members of the Paso Robles High School cross country teams take a moment to pose for photo after their race at the Stanford Invitational in Palo Alto. The teams are set to race in the Atascadero Brug Invitational on Saturday, Oct. 3 at Santa Margarita Lake. Photo courtesy of Sheree Davis.

Bearcat squads to compete at Atascadero Brug Invitational this weekend

–The Paso Robles High School cross country teams participated in the Stanford Invitational in Palo Alto on Saturday, Sept. 26, with the boys’ team placing second overall in their Division 3 race.

Four of the Bearcat runners competing in the D3 boys’ race placed in the top nine. They were led by juniors Luis Armendariz at 15:40 and Trad Berti at 15:48. The Bearcat boys are currently ranked third in the CIF Southern Section and third in the State for D3.

The girls’ squad, however, was not at full strength, with their No. 3 runner sitting out, according to the Bearcat coaches. They placed ninth in the D3 race and were led by senior Ashley Davis at 18:59.

Both squads will be racing locally this upcoming Saturday at the Atascadero Brug Invitational, taking place at Santa Margarita Lake at 9 a.m. The community is encouraged to come out and support the Bearcat runners.