Update: Paso Robles’ skies fill with smoke from fires near Salinas and Carmel 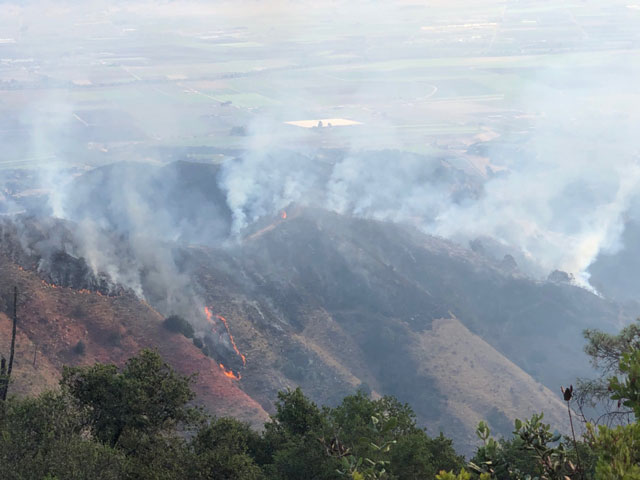 A photo of the River Fire near Salinas, Calif. by Cal Fire.

–Cal Fire Incident Management Team 1 is now managing both the River Fire and the Carmel Fire. The Carmel Fire is currently burning in the area of Carmel Valley Road and Cachagua Road, 3.5 miles South East of Carmel Valley Village. Personnel and fire equipment continue to arrive and engage in fire suppression.

The Carmel Fire had burned 1,200 acres as of Tuesday night and was zero-percent contained. It has destroyed at least three structures with 20 more threatened, according to the Salinas Californian.

The River Fire, near River Road, south of Salinas, had grown to 10,000 acres as of Tuesday night and was 7-percent contained. Some 5,000 people have been evacuated, according to KSBW.

Currently, there are no active fires within SLO County. This is drift smoke from the “River Fire” near Salinas, Calif., according to Cal Fire SLO.

The River Fire is burning near Pine Canyon Road and River Road, south of Salinas. It began at 3:14 a.m. on Sunday morning.

The fire has burned 2,800 acres, causing evacuations and threatening homes in the area of Pine Canyon, Indian Springs, and Las Palmas. The recent sustained high winds have made an ideal environment for dangerous fire conditions throughout the region, and the National Weather Service (NWS) has issued Red Flag Warnings for the area. It is 10-percent contained, according to Cal Fire.

The grant, which is provided through the President’s Disaster Relief Fund on a cost-share basis, will assist local, state, and tribal agencies responding to the fire to apply for 75-percent reimbursement of their eligible fire suppression costs.

Cal OES Fire and Rescue, Law Enforcement and Coastal Region personnel are currently working with other response agencies to address all emergency management, law enforcement, evacuation and mutual aid needs for the fire. Current weather conditions are causing extreme fire behavior, even in overnight hours, and the weather pattern is expected to extend through the week.