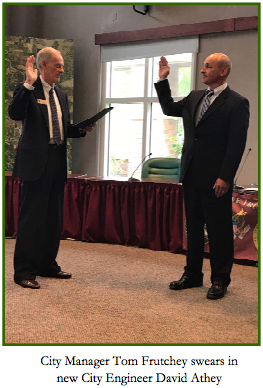 –The City of Paso Robles will soon bid farewell to City Engineer John Falkenstien, who is set to retire on May 31, after a successful career serving the city for nearly 27 years.

The Paso Robles City Council honored John with a Proclamation recognizing his years of service at the meeting on May 16.

During John’s tenure, he helped to design and engineer numerous residential subdivisions that resulted in the construction of thousands of homes, businesses and miles of new streets.

He worked tirelessly for years to find solutions to traffic throughout the community and issues along Highway 46 East, and his success is shown through the adoption of the 2003 and 2011 Circulation Elements and Parallel Route Plan. 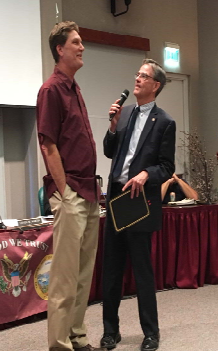 City Engineer John Falkenstien is set to retire on May 31.

John played a key role in the planning and implementation of the Uptown/Town Center Specific Plan, including improvements to the downtown core and the redevelopment of Oak Park. He oversaw the creation and implementation of a variety of development fees that ensure the preservation of the high quality of life in Paso Robles, while allowing for residential growth and vibrant Economic Development and was a passionate voice in support of creating complete streets in Paso Robles that safely and efficiently move vehicles, transit, bicyclists and pedestrians.

On May 8, David Athey started work as the new City Engineer. David and John Falkenstien are working together for three weeks to ensure a smooth transition of the City’s engineering processes. David is a long-time resident of the North County, having grown up in Atascadero. David is a registered Professional Engineer with 21 years of experience working for industry, Regional Water Quality Control Board, City of Atascadero and City of San Luis Obispo. David, his wife Renee, and two children have been residents of Paso Robles since 2000. David is very involved in the local Boy Scout Troop and is excited to be able to ride his bike to work. David will be touring city facilities over the coming weeks.