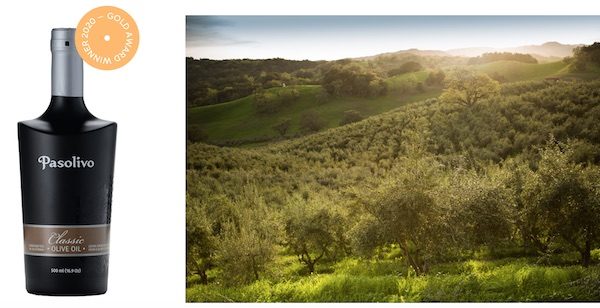 –North County olive oil producer Pasolivo has won four Gold Awards at the 2020 NYIOOC World Olive Oil Competition. The company, which has won a total of 17 awards at the competition since 2016, picked up this year’s additions for its California Blend, Cucina, Tuscan and Classic, all of which are medium blends.

“It is always an honor to win awards at such a prestigious competition,” general manager Marisa Bloch said. “Pasolivo’s top priority is always quality. To have all of our hard work recognized by some of the leaders in the industry is so rewarding. We are excited to share our oils with the world.”

In spite of another successful year, Bloch said that California’s increasingly unpredictable climate created some challenges.

“Due to the extensive rain we received at the start of the year, and the cooler summer, our harvest was much later than most years,” she said.

The NYIOOC World Olive Oil Competition, held each spring in New York, is the world’s largest olive oil contest and its annual listing of award winners is considered “the authoritative guide to the year’s best extra virgin olive oils.”

The complete list of winners can be viewed here.