– Former Paso Robles resident Patricia Ruth Pedersen-Stephens, age 84, passed away in her home of 52 years in Garden Grove, Calif. on Aug. 20, surrounded by her loved ones. Pat was born November 23, 1930, in Phoenix, Arizona to Jens (Jean) and Marie (Bahler) Pedersen. She married Arthur Jerry Stephens in Las Vegas, Nev. in 1954. 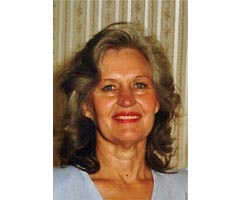 She possessed a constant positive attitude, boundless energy, quietly dogged determination and compassion for family, friends, and all manner of injured, stray and feral animals. Like Felix the Cat and his magic bag of tricks, Pat delighted and entertained her grandchildren with a bottomless purse of unique toys and treats. Her family was the center of her world.

During World War II, her family moved to Paso Robles, where both her parents worked at the Camp Roberts Military Base. Her mother Marie worked in Ordinance while her father Jean was a chemist.

“Patsy” attended catechism and classes at the Mission San Miguel and entered Paso Robles High School at age 12, graduating in 1947. She worked as a telephone switchboard operator and manager in Whittier, Calif.. It was during this time that she met and married dashing Arthur Jerry Stephens. Married for 57 years, they raised seven energetic children.

In the 1950’s Pat and Jerry made the enormous decision to move to Maracaibo Venezuela. Jerry worked for Brown Drilling while Pat raised their three young children, contending with the heat, snakes and huge insects.

On their return to Southern California, their plane made an emergency stopover in Havana the day Castro overthrew Cuba’s regime. Forced to remain on the aircraft for 18 hours with no air-conditioning, she fashioned games and entertainment for her three very young children. Pat always carried a few emergency mints and tiny toys.

Pat and Jerry moved to Garden Grove, where they spent the next 52 years nurturing their growing family and business. With a friend, Pat and Jerry started a concrete saw manufacturing business. During a typically hectic day, Pat took orders over the telephone, created invoices and packing slips, boxed, taped, weighed and set these out on the porch for UPS pickup. She had an uncanny ability to create perfect boxes for unwieldy parts. Next she cooked dinner for eight, helped with school projects, attended night school, and during hot summer evenings irrigated the 20 orange trees.

Pat created a warm environment in their home, welcoming her children’s friends. Many friends recall sitting at the kitchen table chatting with Pat, or coming over to eat her famous homemade pies made with her homegrown apples. She was a gracious host, making sure no one ever left hungry.

Refined, adventurous, hardy, and beautiful, Pat, Jerry, and their spirited children, visited national parks throughout the West. At Yellowstone, an enormous bison stood only three feet from her path. A group of tourists gathered on one side of the road, afraid to pass the massive animal. Determined to show no fear, she continued walking past the bison. Bystanders marveled at her courage. She would later admit her foolishness and that her knees weakened as she was passed the massive head of the buffalo.

She worked tirelessly to enrich the lives of her children as she arranged free private tours of local manufacturing plants, bakeries, and dairies. Pat took her brood to visit museums, live theater, restaurants, and missions. For many years, she enjoyed driving her six children back to Paso Robles for Pioneer Days, and visiting with high school friends. Some of her last journeys were to her beloved Cambria and a poolside fundraiser at Hearst Castle.
Pat lived a full and energetic life. She was known to perform gymnastics in the front yard with the neighborhood children, studied dance and attended exercise classes for seven decades, snow skied, rode bobsleds, elephants, and Jerry’s off-road scooters. She flew with Jerry in his small planes, became a master gardener, read avidly, completed numerous classes at local junior colleges and traveled the world.

When diagnosed with ovarian cancer, Pat carefully weighed the risks and entered an arduous drug trial, advancing the use of Avastin in ovarian cancer. Her cancer remained at bay for seven years. When it returned, she bravely underwent the latest HIPEC procedure, and because of her excellent health, one of the oldest people to do so. She never complained.

Pat lived 30,951 days on this earth – the exact number of days as her husband, Jerry. Pat was laid to rest in the cemetery of Holy Sepulcher, in Orange, Calif., on Aug. 29, 2015. She will be missed more than words can express, but never forgotten.