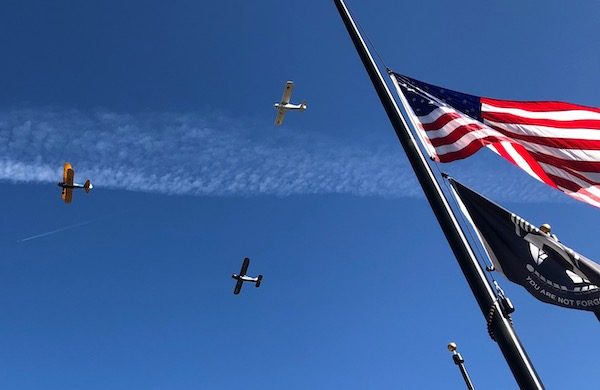 There was a special flyover arranged by the Estrella Warbirds Museum.

–More than five hundred patriots turned out for the 101st Anniversary of Armistice Day Ceremony at Atascadero’s Faces of Freedom Memorial. The event commemorates the Armistice of the First World War, when the guns fell silent at 11:00 a.m. on November 11, 1918. It was renamed Veteran’s Day in 1954.

Guest speaker Greg McGill talked about the inspiration for his forming Honor Flight Central Coast of California. Since it’s inception in 2014, Honor Flight has transported 347 veterans from San Luis Obispo and Santa Barbara Counties to our nation’s capital.

Captain Richard B. Hathock and Mrs. Ann Hatch placed a memorial wreath at the memorial to honor all veterans. Hathcock served in the Viewnam War as a helicopter pilot. Mrs. Ann Hatch recently lost to cancer her husband, Lt. Colonel Bill Hatch. LTC Hatch graduated from the US Military Academy at West Point in 1972 and served with honor in Operation Desert Storm.

Tommy Gong and his sons, Derick and Darin, played taps at the conclusion of the ceremony.

After the event, Atascadero Kiwanis served hot dogs and Bratwurst sandwiches. Volunteers representing local nonprofits manned booths around the park to meet with people and talk about programs that serve veterans and their families. 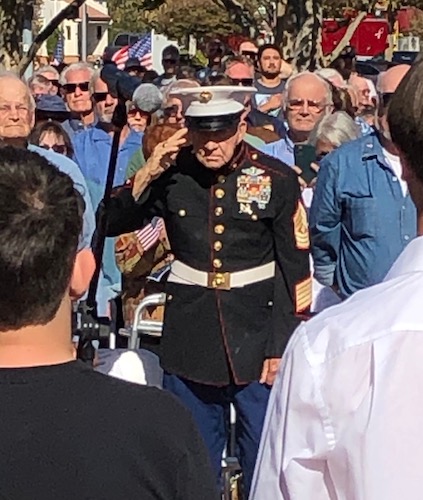 Supervisor Debbie Arnold, who represents the Atascadero area said, “It was very well attended. I talked with Mark Greenaway, who created the sculpture. We think people are wanting to show their appreciation to the veterans and what they’ve done for all of us.”

In Paso Robles, the community gathered at the Paso Robles District Cemetary for the annual ceremony. Community service groups were well represented at the ceremony, and local dignitaries shared words of thanks, sang songs, and a barbecue lunch was provided for the community.