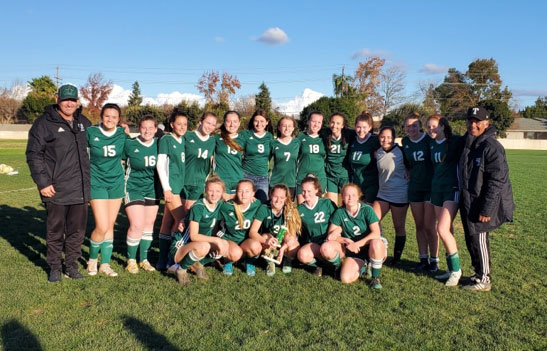 THS suffered a 2 – 1 loss in their second game with Tulare Union. Both teams were evenly matched, so the game was a defensive battle. In an outstanding individual effort, Lauryn Simons dribble past several Tulare defenders down the sideline and toward the opponent’s penalty area. She bounced off a couple of defenders and continued dribbling. Once inside the Penalty Area she took a shot and scored. The second half was a defensive repeat of the first half, but THS was unable to hold onto the lead. Tulare scored two unanswered goals to win the game.

The following day THS met El Diamante in a Semi-Final Division II game. The teams were evenly matched and the game was defensive battle from start to finish. Both teams had several scoring opportunities, but neither team was able to put the ball into the net. Goalkeeper Isabella Cowne made several outstanding saves as the first half ended knotted at 0 – 0. The second half was a defensive repeat of the first half. The game remained scoreless and it appeared it might go into Overtime. Suddenly, Megan Rubin worked her way into the opponent’s Penalty Area, beat a couple of defenders and scored. The game ended THS 1 El Diamante 0 and moved THS into the Division II Championship Finals.

THS played Buhach Colony for the championship title. THS knew it would be a tough battle as Buhach Colony had tied Paso Robles 1 – 1 the previous day. THS had 10 shots on goal compared to their opponents’ 5 shots. The Buhach Colony Goalkeeper made several outstanding saves to keep the score close. However, Emily Puita scored one goal early in the first half and a second goal when she was taken down inside the Penalty Area and awarded a Penalty Kick. The first half ended with a score THS 2 Buhach Colony 0. THS started the second half like they ended the first half, passing and controlling the tempo of the game. Emily Puita scored a third goal, giving her a second “hat trick” for the tournament. As the game was winding down, Lauren English scored an outstanding goal. She dribbled up the middle of the field and several defenders bumped and tried to push her off the ball, but Lauren was determined. She dribbled into the Penalty Area, shot and scored the fourth goal. Earlier goals were assisted by Megan Murray and Lauryn Simons. Minutes later the game ended with THS as Division II Champions!