Peter Bogdanovich to be honored by SLO International Film Festival 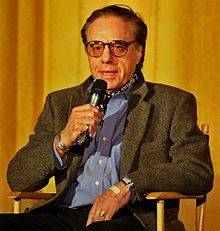 After the award presentation, Bogdanovich will discuss his storied career with Jim Dee, owner of local art-house Palm Theater, and then introduce a special screening of “The Last Picture Show.” A reception in Bogdanovich’s honor will follow at the Warden Building in downtown San Luis Obispo.

Best known for his directorial and writing efforts for “The Last Picture Show,” “What’s Up Doc,” “Paper Moon,” and “Mask”, the acclaimed writer, director, actor and longtime Hollywood personality, got his start working as an actor in live TV and theatre as a teenager in the late 50’s. At age 20 he began directing Off-Broadway plays. He achieved notoriety for programming movies at the Museum of Modern Art in New York City. An obsessive cinema-goer, sometimes seeing up to 400 movies a year in his youth, Bogdanovich prominently showcased the work of American directors such as Orson Welles, John Ford and Alfred Hitchcock.

In 1966, he began working as Roger Corman’s assistant on “The Wild Angels”, and then went on to direct his first film, “Targets”, starring Boris Karloff. He earned his first Oscar nod in 1971 with “The Last Picture Show,” starring then-unknowns Jeff Bridges (2014 King Vidor Award recipient), Cybill Shepherd, Ellen Burstyn, and Cloris Leachman, in this brilliant look at small-town Texan-American life in the early 1950s. The film won the New York Film Critics’ Circle Award for Best Screenplay (which Bogdanovich co-wrote with novelist Larry McMurtry), the British Academy Award for Best Screenplay, and received a total of eight Academy Award nominations, including three for Bogdanovich. Ben Johnson and Cloris Leachman won for Best Supporting Actor and Actress. AFI listed “The Last Picture Show” as one of the “100 Best Films Ever Made.” In 1998, the Library of Congress designated the film as a National Treasure.

The following year he directed “What’s Up Doc?,” a romantic farce starring Barbra Streisand and Ryan O’Neal, followed by “Paper Moon” (1973), a Depression era tale about a pair of unlikely con artists. That film garnered four Academy Award nominations and a win for Best Actress for the nine-year-old Tatum O’Neal – the youngest performer ever to win an Academy Award.

He is the author of a number of books that include This Is Orson Welles, John Ford and Who The Devil Made It, and Who The Hell’s In It, all fascinating biographies that continue to be read by avid cine-files.

As an actor, Bogdanovich continues to take on a variety of roles. The best known is his recurring role of the ‘shrink’s shrink’ in the award-winning HBO series, The Sopranos. A Younger version of Bogdanovich will be seen again soon in the Cannes premiere of Orson Well’s last film that was never completed – “The Other Side of the Wind.” Filmed in the mid-70’s, it also stars Dennis Hopper, Susan Strasberg and John Huston. He also recently directed the spring release, “She’s Funny That Way,” with a cast that includes Owen Wilson, Jennifer Aniston and Cybill Shepherd.

• World Premieres of “Fear No Fruit,” “My Name is David,” and “Out and Around,” in venues all over San Luis Obispo County.

• Special Presentation films throughout the festival include “The Mask You Live In” (recently premiered at Sundance), “Red Obsession,” “The Breakfast Club” – A Tribute to John Hughes and “Local Color” with director/writer/painter, George Gallo.

• “Citizen Kane” will screen in the private Hearst Castle Hilltop Theatre for an exclusive audience of 50 people, after a sunset tour and reception. Friday, March 13, 5:30pm

All special events, festival schedule and complete film lineup are available at www.slofilmfest.org or by calling (805) 546-3456.