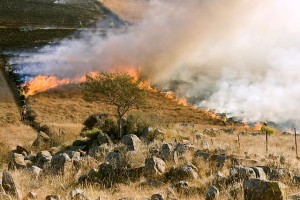 – Pacific Gas and Electric Company is conducting daily aerial fire patrols across hundreds of miles of its service area, including the Sierra Nevada mountains in Northern and Central California and along the Central Coast. Flights began on June 15 and will continue through October 15 to assist state and local fire agencies with early fire detection and response to stop fires from spreading. Since the patrols began, PG&E has spotted nine fires in three regions, and in two cases, was the first to report the fires.

PG&E is funding the daily fire patrols as part of its comprehensive drought emergency response plan. The utility is using four fixed-wing aircraft to fly from Redding to Auburn in the north, Auburn to Mariposa in the Central Valley, and Santa Cruz to Santa Maria near the coast. A fourth flight will was added in Mendocino County on July 1. Patrols are flying seven days a week from 3:30 p.m. until dusk—the time of day when wildfires are most likely to ignite because hot, dry weather is at its peak.

The patrols are coordinated through PG&E’s aerial operations. Spotters report any smoke or fire they see to PG&E, Cal Fire and the United States Forest Service, if it is on federal land.

“PG&E is proud to partner with federal, state and local agencies to mitigate the increased threat of wildfire caused by one of the most severe droughts in state history. Aerial fire patrols are a proactive approach to prevent and prepare for devastating fires during this prolonged drought. We encourage all of our customers to be prepared and have a plan in case of emergencies,” said Barry Anderson, vice president of emergency preparedness and operations for PG&E.

“Fire activity has been extremely high as we head into the summer months, made worse by ongoing drought conditions. Cal Fire has a robust aerial firefighting program that supports our ground forces; however our aircraft focus on battling active fires. Reporting wildfires is everybody’s responsibility and we greatly appreciate the work PG&E is doing every day to survey from the air for potential fire starts,” said Chief Dave Teter, Cal Fire deputy director of fire protection. “Public private partnerships like this are critical to our shared mission of public safety.”

Cal Fire has already responded to more than 2,700 wildfires, scorching thousands of acres in the first six months of 2015 — well above average.

In addition to its daily aerial fire patrols, PG&E is taking a number of steps to prevent wildfires as part of its drought emergency response plan including:

According to Cal Fire, more than 90 percent of all wildfires in California are sparked by people, and therefore preventable.