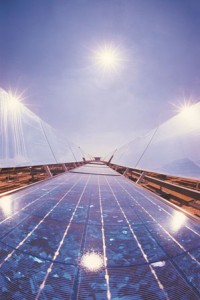 Pacific Gas and Electric Company has been recognized by the Solar Electric Power Association as a national leader in solar power. PG&E is included in SEPA’s seventh annual Utility Solar Rankings report, which measures a utility’s newly installed solar power connected between Jan. 1 and Dec. 31, 2013.

For the sixth consecutive year, PG&E earned a first-place ranking in the Solar Megawatts category with more than 1,400 megawatts installed. PG&E was also ranked sixth in the Solar Watts-Per-Customer category.

“We are firmly committed to renewable energy and solar is a vital part of California’s energy mix,” said Steve Malnight, PG&E’s vice president of Customer Energy Solutions. “Given both PG&E’s large-scale solar procurement and our customers’ ongoing support of solar and other clean technologies, we are confident we will continue to be a renewable energy leader.”

PG&E delivers some of the cleanest energy in the nation to 15 million people in Northern and Central California. More than 55 percent of the energy PG&E delivers comes from sources which emit no greenhouse gases. By the year 2020, PG&E expects that number will grow to approximately 64 percent.

“Congratulations to PG&E for being one of the top utilities to integrate solar power and provide clean renewable solar energy as an option for utility customers,” said Julia Hamm, president and CEO of SEPA. “In 2013, U.S. utilities interconnected approximately 4,100 megawatts-ac of solar electric power to the grid, energizing systems that range from a few kilowatts on residential rooftops to utility projects delivering hundreds of megawatts. In total, the amount of solar connected was almost double the amount that was connected in the previous year. SEPA believes that the initiatives of utility leaders like PG&E are critical to the continued growth of this clean and fuel-free resource.”

About SEPA
SEPA is an educational non-profit organization based in Washington D.C. dedicated to helping utilities integrate solar power into their energy portfolios. The SEPA Top 10 “Utility Solar Rankings” report is one of many market intelligence, utility interaction and educational services SEPA provides to its utility and solar industry members.

About PG&E
Pacific Gas and Electric Company, a subsidiary of PG&E Corporation (NYSE:PCG), is one of the largest combined natural gas and electric utilities in the United States. Based in San Francisco, with more than 20,000 employees, the company delivers some of the nation’s cleanest energy to 15 million people in Northern and Central California.