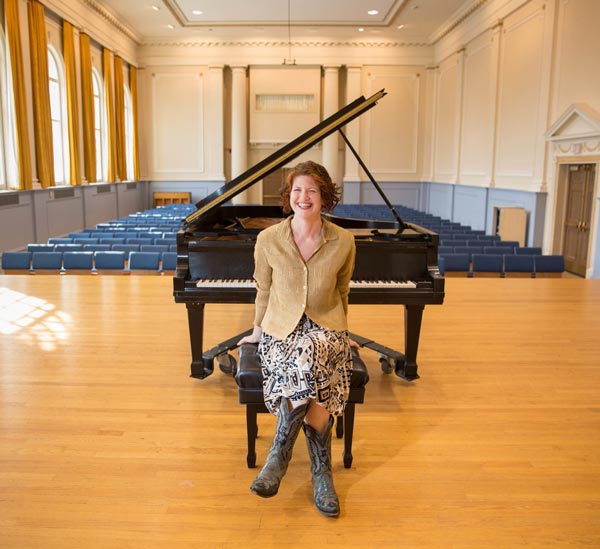 On Saturday, April 29, in the historic Paso Robles Inn ballroom, Pianist Jocelyn Swigger will perform all 27 of the famously difficult Études, or exercises for piano, written by Polish composer Frederic Chopin, are three sets of solo studies for the piano published during the 1830s.

Chopin’s Études formed the foundation for what was then a revolutionary playing style for the piano. They are some of the most challenging and evocative pieces of all the works in concert piano repertoire.

Swigger began learning the Chopin Études in 2010, but says that seven years of study is nowhere near enough. “The biggest surprise has been how fiendishly difficult they are,” she says. “and also how fulfilling they are. I’m not tired of playing them, and I feel like I learn something from them every day. I don’t believe I’ll ever feel like I’ve mastered them. Each time I perform them, I don’t know for sure what’s going to happen. It makes it exciting for me and for the audience.”

Swigger has performed in San Luis Obispo county twice before with Festival Mozaic, but it wasn’t until recently that she discovered the link between Chopin, Paderewski, and Paso Robles.

Ignacy Paderewski, Paso Robles landowner, grower and winemaker and inspiration for the Paso Robles-based Paderewski Festival, was a virtuoso pianist and composer, who performed and toured internationally. He also arranged and edited music for many of the major publishing houses of the day. His edition of the Chopin Études is among the most respected and studied by pianists regularly to this day.

“Recently my journey with the Études has included traveling anywhere I can find historical pianos, and that’s really shaping some of my ideas about how some of these pieces might have sounded when Chopin wrote them.” says Swigger. “When I discovered that a piano owned by Paderewski was in Paso Robles, I felt that this was a natural next step in my journey especially since he was responsible for one of the most important editions of Chopin’s Études.”“Playing for San Luis Obispo County audiences is always such a pleasure,” says Swigger. “I’m looking forward to seeing familiar faces and welcoming new listeners.”

Swigger will perform at the Paso Robles Inn on two pianos – one that belonged to Paderewski that is part of the historical collection of the Paso Robles Inn, and one that belongs to the Paderewski Festival. The performance will also feature a multi-media display; a camera will project Swigger’s hands on the keyboard, along with the score of the music as it is performed. The audience is invited to join the artist for a wine reception after the concert, featuring wines from wine sponsor Cass Winery.

Swigger is Associate Professor of Music and Coordinator of Keyboard Studies at the Sunderman Conservatory of Gettysburg College. She performs as a soloist and collaborative pianist on the East Coast, Europe and South America, and has bachelor’s degrees from Oberlin College and Conservatory and master’s and doctoral degrees from the Eastman School of Music. She has released three albums of solo piano music on Con Brio Records and she is the host of the podcasts Play It Again Swig and Just Piano Improv. Swigger’s musical talk on memorizing music has been featured on TEDx Talks.

The pianist will also lead a Master Class for select young pianists, including prior competitors in the Paderewski Festival Piano Competition, on the morning of Sunday, April 30, at the home of Alexandra Santos in San Luis Obispo.