Heavier usage can put more stress on the natural habitat

– From January through September, more than 142,000 visitors crisscrossed the trails of Pismo Preserve, the 880-acre open space area above Pismo Beach with panoramic views spanning the coastline. That is twice the number the Land Conservancy of San Luis Obispo County anticipated when it opened the preserve in January 2020, the conservancy’s executive director Kaila Dettman said. The nonprofit land Kaila Dettman trust group analyzed trail-usage data in San Luis Obispo County during the preserve’s planning stages and estimated 100,000 visitors per year.

But by September, the preserve had zoomed past those expectations. By the end of the year, Dettman anticipates the preserve will see a total of 200,000 visitors, a number that is likely to become the norm.

“The 2021 numbers are important because we’re past that rush of initial curiosity and still seeing a staggering number of visitors,” she said. “And that’s even after the economy opened up and people had more options for entertainment and exercise.”

The Land Conservancy purchased the vast parcel of rolling grasslands and oak-forested hillsides for $12 million in 2014, after a whirlwind of fundraising saved it from commercial development. In partnership with Precision Construction Services of San Luis Obispo, the nonprofit opened the preserve with amenities including an ADA accessible parking lot, restrooms, and a world class 11-mile network of trails for hikers, mountain bikers, and equestrians. All construction was done in close collaboration with Northern Chumash tribal representatives due to culturally sensitive areas near the trailhead.

“Keeping the land intact was the guiding idea behind the entire project,” because of its significance culturally and environmentally, said Precision’s Adam Strauss, the project manager. “We wanted to make it accessible to everyone, but in an almost invisible way.”

Other amenities include an information kiosk, ADA-accessible picnic area, bike parking and repair stand, and on-site parking with horse-trailer spaces. The unobtrusive, ranch-style design doesn’t distract from the stunning natural vistas, and picnic tables and benches are sprinkled among the trails.

While the preserve has become a major attraction for outdoors enthusiasts, the heavier usage has also put more stress on the natural habitat and required additional conservation efforts to keep the land viable for the deer, foxes, mountain lions, and other animals that live on it, Dettman said.

More trail maintenance is required, as well as restoration of grasslands damaged when users stray off the trails. More staffing has been needed for fire prevention, trash pickup, and other duties. COVID-19 has also required additional supplies and daily professional cleaning of restrooms and other facilities. 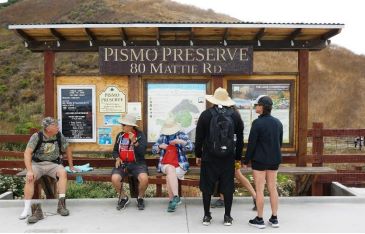 The Land Conservancy, whose mission is to protect and care for diverse wildlands, is seeking donations as part of its year-end fundraising drive to cover these additional expenses and also support programs at the Pismo Preserve, such as docent-led hikes exploring the wildlife and geology of the preserve, and the children’s Learning Among the Oaks program. As a local community-supported nonprofit, the
Heather Gray organization relies on volunteerism and donations to manage the preserve and implement its mission throughout the county.

“Pismo Preserve is playing a big role in the health and well-being of our community,” Dettman said. “That’s a good thing. But most people who use the trails don’t realize that we are not a county or city park, and that the maintenance and care of the preserve is funded only by their donations.”

For more information or to contribute to Pismo Preserve, contact Kaila Dettman, Executive Director, (805) 544-9096 or kailad@lcslo.org.