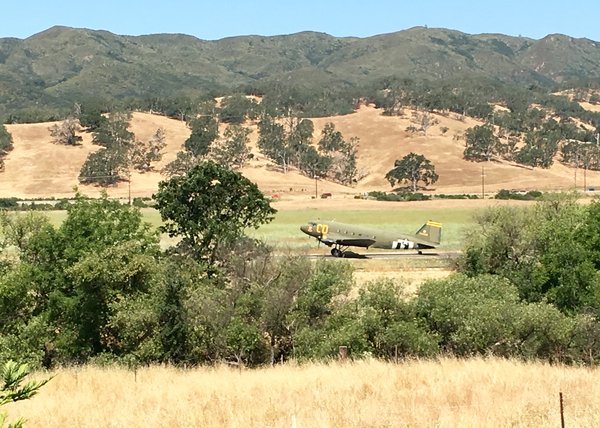 Best of the West Antique Show

–Santa Margarita Ranch, 9000 Yerba Buena, will host the annual Best of the West Antique Equipment Show, featuring antique tractors, vehicles, aircraft, trains and more over Memorial Day weekend in Santa Margarita, California. Admission to the event is $10 per person for a one-day pass or $25 for the three-day event, children 10 years and under are free. Featured at this year’s event will be the B25J Mitchell “Executive Sweet,” a 71-year old warbird, whose exciting history ranges from active duty to the big screen. Considered “Queen of The Ranchos,” the Santa Margarita Ranch is approximately 15,000 acres of diverse landscapes and sustainably biodiverse vineyards.

The event will run from 8 a.m. to 5 p.m. Saturday, May 28 and Sunday, May 29, the Executive Sweet will be at the historic Santa Margarita Ranch and participating in a mid-day fly over tribute to our troops. Further, spectators can enjoy rides from 10 a.m. to 5 p.m. for $425 per person as a charitable contribution toward keeping this piece of history flying. Each ride is approximately 30 minutes and passengers are welcome to experience this once-in-a-lifetime ride, including the chance to sit in the front and rear gun turrets while in flight. While on the ground, the public will be able to inspect the interior and exterior of the aircraft. The Pacific Coast Railroad will operate beginning at 10 a.m. each day.

The Rossi Foundation will again underwrite rides for our veterans. On a first come, first served basis, veterans will pay half-price for rides. For those who served in World War II, the rides will be complimentary. Please contact (805) 540-3214 for details.

About the B25 Mitchell ‘Executive Sweet’ 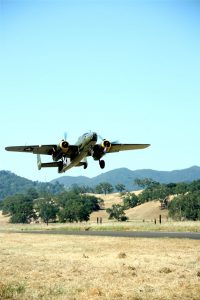 B25 Executive Sweet in flight.

Millions of aviation fans have seen this popular 71-year old warbird perform. Built in Kansas City in 1944-45 as a B-25J, Executive Sweet saw extensive stateside service throughout the war as a crew trainer. In 1948, it was converted into a USAF VB-25J, a VIP transport, until the end of her service. In December of 1954 it was upgraded and designated a VB-25N by Hayes Aircraft, inc. After several more years in military service, the Mitchell was sold as surplus and became a crop sprayer. Acquired by Hollywood’s Filmways Studios in 1968, the B-25 became the lead “on camera” aircraft named Vestal Virgin in the film Catch-22. Placed for sale after completion of filming in 1970, it was purchased by Ed Schnepf in 1972 to being a two-year restorative program back to a wartime J model appearance.

Looking factory-new in its bare metal finish, Executive Sweet once again was armed with thirteen .50 caliber machine guns, a Norden bombsight and operable bomb bay, authentic insignia and interior detailing down to crash axes and crew intercom. In 1982, the Executive Sweet was donated to the newly formed Aeronautical Foundation Museum at Camarillo, California, who has been operating it ever since. Executive Sweet has since appeared in a dozen major films and numerous TV shows and commercials and has set the pace that soon saw hundreds of other warbirds fully restored to their original wartime pristine condition.