– A San Miguel man, 31-year-old Daryl David Blair, was arrested Thursday on charges of stealing a vehicle and possessing drug paraphernalia, according to the Paso Robles Police Department. 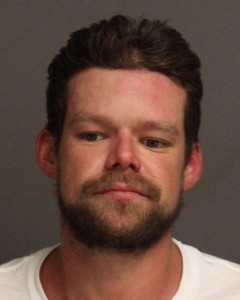 On Thursday July 30, at approximately 12:40 p.m., the police took a crime report involving a 1969 General Motors pickup truck stolen from a parking lot along the 2800 block of Riverside Ave, in Paso Robles. The victim reported that he had parked the truck in the lot around 9:30 a.m. that morning. When he returned a few hours later, the truck was gone.

At approximately 3 p.m., police received a call from a family member of the victim. The reporting party said he observed the stolen truck traveling east on Union Road in rural Paso Robles. Officers responded to the area, located the truck, and conducted a traffic stop along the 1700 block of Moon Valley Rd. The driver of the vehicle abandoned the truck and attempted to run from officers.

The officers were able to catch and detain the suspect, without further incident. The suspect, 31-year-old Daryl David Blair of San Miguel was arrested. Subsequent to Blair’s arrest, Officers located drug paraphernalia on his person. Blair was booked into San Luis Obispo County Jail for stolen vehicle and drug paraphernalia charges.