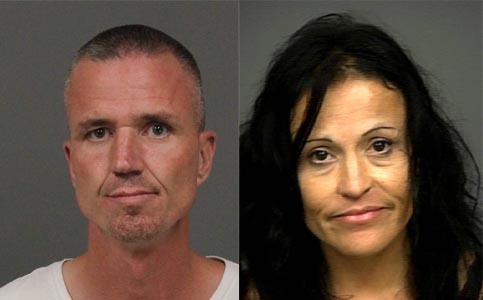 –On Nov. 29 both suspects, Ian Mike Robbins and Victoria Renee Trujillo, were charged by the San Luis Obispo District Attorney Dan Dow with several counts of armed robbery in relation to the DK’s Donuts armed robbery on Nov. 23 and the La Miramar Musica Y Mas clothing store armed robbery on Nov. 16. Robbins allegedly robbed both stores at gun point while Trujillo acted as the getaway driver for their vehicle. Both suspects entered not guilty pleas during the hearing and remain in custody, according to reports.

Robbins and Trujillo were arrested shortly after midnight on Nov. 23, 2016 when they were located by PRPD investigators at a home on Chardonnay Place in rural Paso Robles.

The arrests stemmed from two recent armed robberies in Paso Robles. The first armed robbery occurred on Nov. 16, at La Miramar clothing store, and the second at 5:15 p.m. on Nov. 22, 2016 from DK’s Donuts, 1740 Spring Street.

Detectives had been pursuing leads generated out of the La Miramar robbery investigation and were subsequently able to use those leads to positively identify Ian Robbins as responsible for the DK’s Donuts robbery. In both cases it appears Victoria Trujillo was Robbins’ accomplice, acting as a getaway driver.

In both robberies store clerks said Robbins, armed with a pistol, entered the business and demanded money. The clerks complied and provided the suspect with money from the cash registers along with other store wares. Upon receiving the money, Robbins fled out the front door of the stores to an awaiting getaway vehicle operated by Trujillo.

Investigators are working with other county law enforcement agencies to determine if Robbins and Trujillo are responsible for other robberies in San Luis Obispo County. Anyone with information about these crimes or any person(s) involved is urged to call the PRPD or Crime Stoppers at (805) 549-STOP (549-7867) or submit a Web Tip from the Crime Stoppers website at http://www.slotips.org. You can also submit a “TEXT TIP” by texting “slotips” and your message to CRIMES (or 274637). You do not have to give your name.