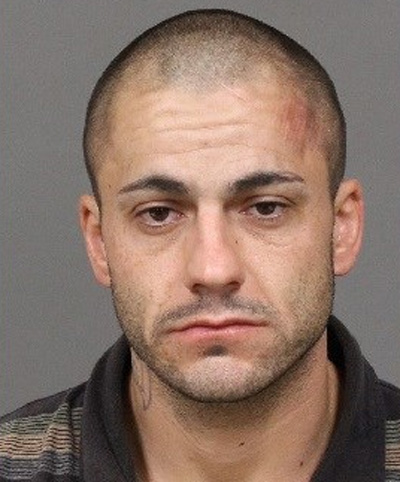 –Atascadero police caught up with a wanted man Friday, arresting him in an attic of a house. The man, 28-year-old Dale Burr, had fled from police on Friday following a chase through the city.

The incident began when police responded to a verbal argument on Thursday at about 4 p.m.

Upon officer’s arrival, Burr was inside of a vehicle with an attached trailer which began backing down a driveway of the location. Officers began giving verbal commands to Burr to stop the vehicle and he failed to do so, according to an Atascadero Police Department news release.

Burr placed the vehicle in drive and nearly ran over a motorcycle officer and another officer who was on foot, police report.

A vehicle pursuit ensued northbound on nearby train tracks. Burr collided into a fence on the train tracks under the Highway 41 Bridge. Burr fled on foot across Highway 41 and up Pine Mountain. Atascadero police officers and San Luis Obispo County Sheriff’s deputies conducted a search in the area with K-9’s but were unable to locate Burr.

It was later learned the vehicle and the trailer Burr was operating were reported stolen and that Burr was wanted on felony and misdemeanor warrants.

Police track Burr down and arrest him

On Friday, Atascadero police officers and detectives responded to a residence in the city after information was received Burr was at the location. A sheriff’s deputy K-9 responded to assist.

Burr was located hiding in the attic of the location with the assistance of the Atascadero Fire Department who used a handheld thermal imaging device known as a “FLIR” to see where Burr was hiding through the drywall.

Burr was taken into custody without incident and later booked at the San Luis Obispo County Jail on the following charges: