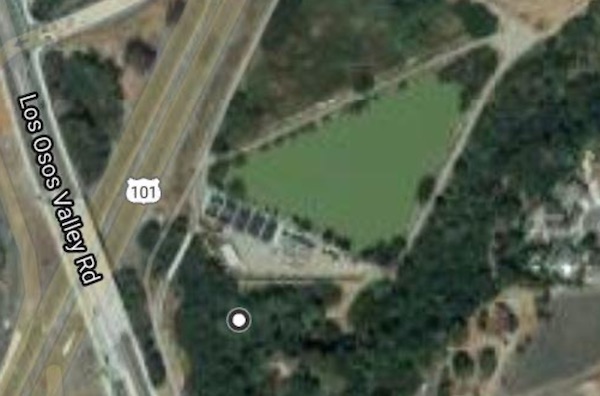 The body was found in the San Luis Creek area, North of Los Osos Valley Road and East of HWY 101 (Map is above for approximate location).

During their attempts to provide services to subjects camping along the Bob Jones Trail, CAT and SET located a tent near the trailhead at Los Osos Valley Road. They attempted to contact the subject inside the tent and immediately noticed the subject was deceased. It appeared the subject had been deceased for several weeks. San Luis Obispo Police Department Detectives responded and did not find anything suspicious. Several people near the area were interviewed and they advised the deceased subject had ongoing health issues. A San Luis Obispo Sheriff’s Coroner Investigator responded and took over the investigation. Based on the initial investigation, the cause of death is unknown and will be determined by an autopsy which is scheduled for early next week.

The suspect was described as a male adult in his 60s, who was a transient in San Luis Obispo.

This investigation is ongoing pending the results of the autopsy. At this time, the subject’s name is not being released until next of kin can be notified.

If you have any information about this incident you are encouraged to call the San Luis Obispo Police Department at (805) 781-7312 or Crime Stoppers at (805) 549-STOP.

SLOPD utilizes Nixle as an electronic information-sharing system. Refer to http://www.nixle.com. to create an account and receive automatic timely updates and important news.