Police drew guns on the red Eclipse on the 1300 block of Park Street Sunday afternoon before removing the two occupants and removing items from the vehicle. Photo by Kevin Kuhn

Thomas Hill Organics employees were cleaning up from the lunch crowd and getting ready for dinner on Sunday afternoon when they noticed police surrounding a red Eclipse across Park Street from the restaurant in downtown Paso Robles with guns drawn. Paso Robles Police Department Lt. Tim Murphy said that officers were on the lookout for the vehicle after a report was made by the Atascadero Police Department. Subsequently, Robert David Clark, 22, of Atascadero and Scott Hubert Barnhill, 19, of Atascadero.

APD Public Information Officer Jason Carr said that they were searching for the car because it was suspected that it was related to a burglary that occurred in Atascadero the previous evening, Aug. 23. Carr said that a handgun and money was stolen from the residence, so it was believed that the suspects had the gun in the car. Due to the suspects possibly having a handgun in their possession, Murphy said the department treated the stop as a high-risk stop to ensure the safety of all involved.

Thomas Hill Organics General Manager Kevin Kuhn said that he got a text from staff right before 4 p.m. The restaurant is located at 1313 Park St.

“My servers saw guns being drawn on a car and apparently they pulled one or two teenagers out of the car,” Kuhn said, noting that the officers had dogs with them.

After the two were removed from the car, officers began removing brown paper bags that the employees said appeared to be drugs. As of Sunday evening, the car remained in front of the restaurant. Kuhn said that the restaurant’s business was not affected because the restaurant is closed from 3 to 5 p.m. and the officers left between 5:05 and 5:15 p.m.

Murphy said that drugs were located in the car, along with stolen items. He said that the Paso Robles Police Department secured the scene and then the Atascadero Police Department took over. To secure the scene, Murphy said that the officers surrounded the vehicle with their vehicles, stood by them and drew their guns. Officers gave commands to the suspects in order to have them exit the vehicle safely. Once they were out of the vehicle and safety ensured, the suspects were held until APD arrived.

APD Commander Joe Allen said that most of the items stolen from the victim’s home were recovered between the vehicle and a search of Clark’s residence. He said that it is believed that Clark was familiar with the house because officers found a map and a how-to in the suspect’s car, “which we’ve never seen before.” Allen said that the burglary occurred sometime between 7 p.m. on Saturday, Aug. 23 and 4 a.m. on Sunday, Aug. 24. The residents were not home, but when they returned, it was discovered that the power had been turned off and the safe stolen. 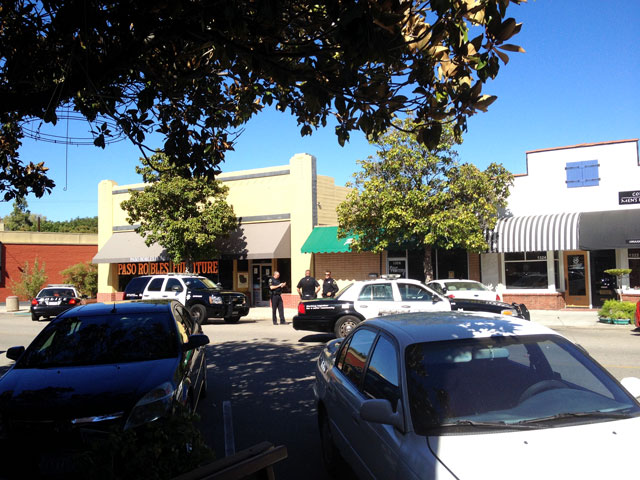