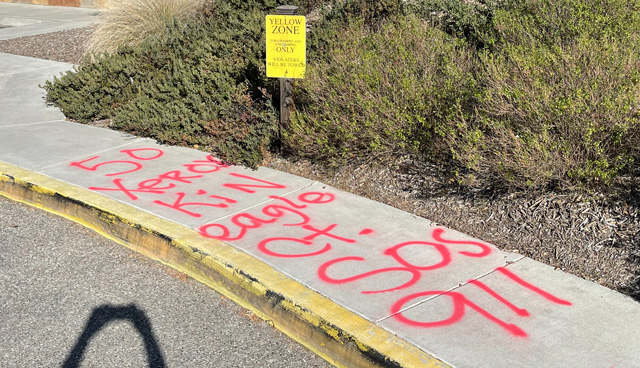 Graffiti on a sidewalk at Kennedy Club Fitness. The club had it cleaned up Monday morning.

“On Saturday the police department responded to several reports of graffiti in town,” the department posted to social media. “After a few days, we were able to track down two suspects who later confessed to the vandalism.”

Ben Delashmutt and Michell Baranek, both 43 years old, of California Valley, will have charges filed against them with the San Luis Obispo County District Attorney’s office for felony vandalism.

“Thank you to those citizens that assisted PRPD in solving this crime,” the police said.

At least six places were marked with unusual messages

At least six taggings were discovered Saturday morning: at a Walmart parking spot and two sides of an old yellow school bus parked nearby, a Kennedy Club Fitness sidewalk, and two places at Pacific Premier Bank. All were close to the intersection of Niblick and South River roads.

There is an Eagle Court in Paso Robles. It’s a quiet cul-de-sac by the Paso Robles Golf Club with no such address. The old school bus appears to be abandoned with no license plates, markings, or signs of habitation.

Images of the vandalism were posted to social media and generated a stir with over 100 comments from locals worried about gang threats, a cry for help, mental illness, and even a cult involving the granddaughter of the founder of Xerox. 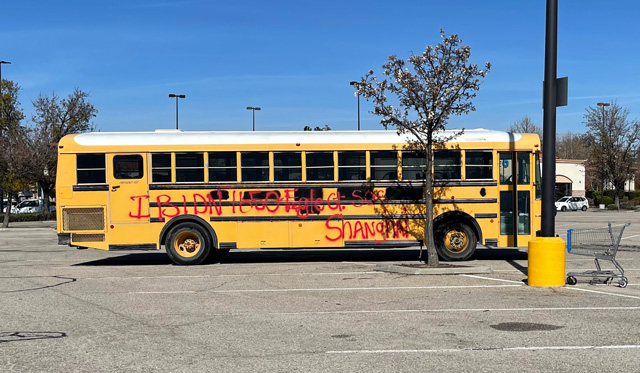 Keith Swank, general manager of Kennedy Club Fitness, first noticed the vandalism Saturday morning. He said he doesn’t know what it is all about. “It’s weird stuff and in several places. I guess it’s a prank but very complex for that.”