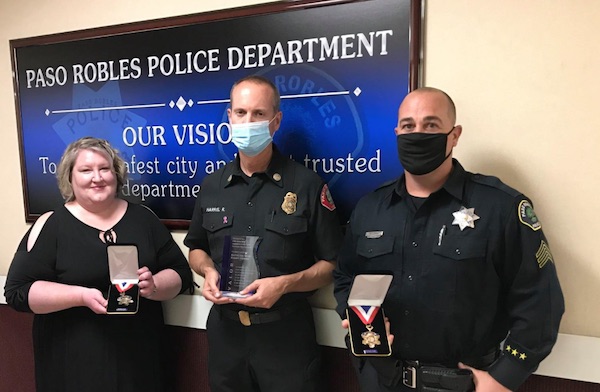 –Earlier this week, Paso Robles Police Chief Ty Lewis presented Dispatcher McKinley, Sgt Lehr, and Battalion Chief Harris with medals of valor for their heroic actions in response to the active shooter situation that occurred in Paso Robles in June.

In the early morning hours of June 10, 2020, Dispatcher McKinley was working as a solo dispatcher, when she was monitoring the security camera footage surrounding the station and noticed a subject outside the police department with a firearm. Dispatcher McKinley alerted officers of the suspect’s location around the station. Dispatcher McKinley had the forethought to notify the Paso Robles Fire Department, who was headed back to the station after a call for service, advising them to stay away from the Public Safety Center. Although she may not have known it at the time, she undoubtedly saved the lives of our Fire personnel. Dispatcher McKinley, certainly rattled by the attack on our station, kept her composure and immediately tracked the subject on camera, updating officers with the shooter’s location.

At 0425 hours, she would hear the most chilling words any law enforcement officer or dispatcher will ever hear cracked over the radio, “Officer Down.” As units on the scene attempted to find a way to safely rescue Deputy Dreyfus, who had been shot, a SLOSO deputy reported a white truck was approaching the location of the downed officer. Unbeknownst to anyone, the driver of the truck was Sergeant Lehr, who was answering the call for help.