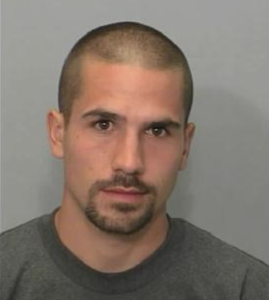 On Thursday, June 27, 2013 at about 9:07 p.m., Paso Robles police received a report of a suspicious subject attempting to enter vehicles parked in the lot at Barney Schwartz Park, 2979 Union Road.

Officers responded and located the subject who was detained without incident. This subject was identified as 26-year-old Paso Robles resident Jesse Lee Wallraven.

As a result of this investigation, it was determined that Wallraven had entered more than one vehicle at the park and stolen personal property. Wallraven was found in possession of this stolen property and narcotics paraphernalia and was arrested for those charges, as well as petty theft. He was later booked into the SLO County Jail.

Wallraven was in the company of a 15-year-old male subject who was found to be in possession of heroin. This juvenile was arrested without incident and booked into the SLO County Juvenile Services Center. He is a Paso Robles resident and is not being identified due to his age.

The Paso Robles Police Department would like to take this opportunity to remind the community of some crime prevention tips:

Anyone with information about these events is asked to call PRPD. Persons wishing to remain anonymous can contact Crime Stoppers at 805-549-STOP or submit a Web Tip from the Crime Stoppers website at http://www.slotips.org. You can also submit a “TEXT TIP” by texting “slotips” and your message to CRIMES (or 274637). You do not have to give your name.