–With information obtained during the initial incident, Atascadero Police detectives have been conducting an ongoing investigation in order to identify and arrest the driver who fled from police officers on July 19. On July 21, 2020,

Atascadero Police detectives, with the assistance of the San Luis Obispo County Probation Department and the Paso Robles Police Department, located the suspect in the city of Paso Robles. The suspect, a 17-year old Paso Robles resident, was placed under arrest without incident.  A search of the area during the initial incident, as well as the suspect’s residence, was conducted and the involved weapon is still missing.

Atascadero Police detectives are continuing to follow-up on this incident and they encourage anyone with information to contact the Atascadero Police Department at (805) 461-5051 or Crime Stoppers.

–On Sunday at approximately 11:11 p.m., an Atascadero Police officer conducted a check on a vehicle in the Paloma Creek Park parking lot located in the 11600 block of Viejo Camino. During the contact, the driver fled in the vehicle and a vehicle pursuit ensued. The pursuit terminated when the driver collided with a light pole at the intersection of El Camino Real and Santa Rosa Road. The driver fled from the collision towards Motel 6 with what appeared to be a rifle in his possession. The other occupants of the car, all juveniles, were detained.

Following an extensive search as well as officers continually saturating the area we were unable to locate the suspect. The Atascadero Police Department Investigations Unit is working to confirm the identity of the suspect at this time. Although it appears the suspect was armed at the time, there is no indication that there is any current threat to members of our community. No further information will be released at this time. 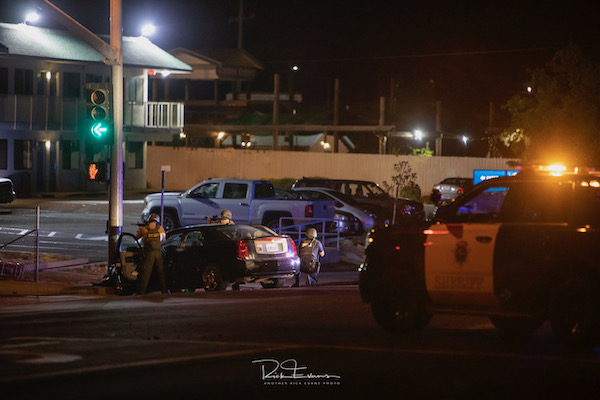 –Police were searching for a suspect armed with an AR-15 at Motel 6 in Atascadero late Sunday night, according to a report by the SLO Tribune.

At about 11:15 p.m., an Atascadero police officer was pursuing a vehicle when it crashed at the intersection of El Camino Real and Santa Rosa Road and a man fled the scene holding an AR-15, the report says.

The suspect was described as a Hispanic male in his 20s wearing a gray shirt, blue jeans, and red shoes.