Paso Robles News|Thursday, July 9, 2020
You are here: Home » Crime » Update: Police use Taser to subdue suspect who fled from accident

Update: Police use Taser to subdue suspect who fled from accident 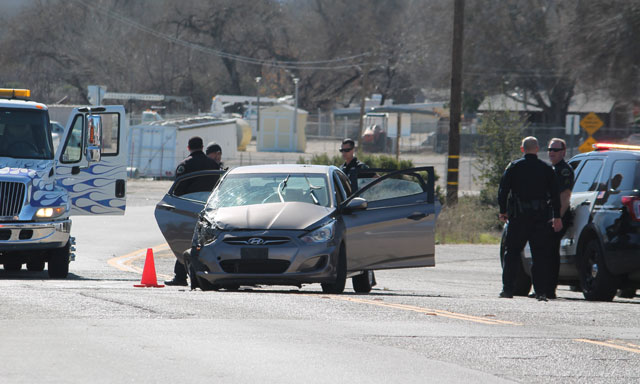 The scene of an accident on Paso Robles Street. Photo by Anthony Reed

–On Tuesday, at about 11 a.m., Paso Robles Police and Fire Departments received several calls for a two-vehicle traffic accident in the 800 block of Paso Robles Street. The driver of a Hyundai sedan reportedly exited Highway 101 onto Paso Robles street at a high rate of speed and hit the rear of a parked white Chevy Silverado.

Callers to 911 said the driver of the Hyundai was running away yelling obscenities and attempted to carjack a vehicle driving by in the area.

When officers from Paso Robles police arrived on the scene, they contacted the suspect who was in the middle of Paso Robles Street and yelling, according to a police report. The suspect, who was later identified as Darren Santagelo, 32, of Atascadero, became violent toward the officer by kicking and punching him.

The officer deployed his Taser and with the assistance of arriving officers was able to get the suspect into custody. Paso Robles Emergency Services arrived to render aid to Santagelo, who continued to resist the officers and medical treatment, the report says. The suspect was eventually restrained and transported to Sierra Vista Regional Medical Center for injuries sustained in the traffic collision.

Through the initial investigation, it was discovered that Santagelo, who was suspected to be under the influence of a controlled substance at the time of this incident, collided with a parked vehicle and ran away from the initial collision, police report.

Santagelo was later booked at San Luis County Jail for driving under the influence, fleeing the scene of a traffic collision and felony assault on a police officer. Police report the investigation is ongoing at this time.

– Anthony Reed contributed to this report