Prison guards to be tried for voluntary manslaughter

Before the preliminary hearing began, more than 50 supporters of the victim arrived at the courthouse, some wearing shirts saying “Justice for Alvaro.” The defendants also had supporters.

For a detailed report of the bar fight and courtroom hearing, read the SLO Tribune story. 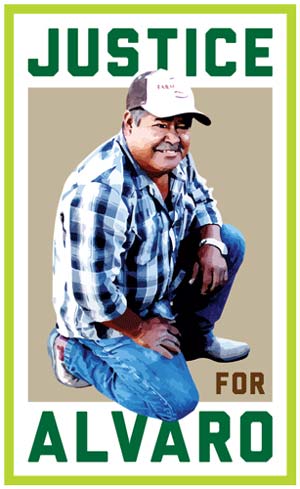 “We want to thank the thousands of friends, neighbors, vineyard owners, wine makers and community members who have shown their support by sharing memories of Alvaro, helping our family during this very difficult time and demanding Justice for Alvaro,” said Mayra Medrano, Alvaro’s youngest daughter. “His killing was tragic and senseless and we are all heartbroken.”

“The surveillance video evidence presented in court today is clear and tells the truth, the correctional
officers beat Alvaro when he was defenseless and helpless, causing his death,” said Alvaro Medrano, Jr. Alvaro’s son. “We hoped for quicker arrests and now expect aggressive prosecution and maximum sentencing for those responsible.”

“The brutality of these so called law enforcement officials is unconscionable,” said Ken Riding, owner of La Vista Vineyard in Paso Robles and friend of Medrano. “Our community and justice system must send a clear message to everyone, including the law enforcement community, that no one is above the Law.”

Medrano managed La Vista Vineyard in Paso Robles with Riding. “Alvaro worked with me at La Vista Vineyard for about seven years. We had a very good time together and successfully grew the vineyard from brand new plants to a flourishing and very well regarded vineyard in the wine industry. All because of Alvaro, of course! He was always a soft spoken man, compassionate, selfless and desiring to help in any way he could. Alvaro will be sorely missed by me and my family,” added Riding.

Alvaro Medrano, Sr. was senselessly and tragically killed by off‐duty correctional officers in the street in his neighborhood in downtown San Miguel, CA on September 7, 2014. According to reports, Alvaro was confronted and then beaten by the correctional officers. Alvaro was transported to the hospital where he was declared dead on arrival.

The sheriff’s officers initially interviewed the correctional officers involved in Alvaro’s killing and released them at the scene. On September 18, 2014, the Sheriff obtained arrest warrants for two correctional officers from Salinas Valley State Prison in Soledad, CA on voluntary manslaughter charges. Both posted bail and neither is in custody today.

Alvaro Medrano, Sr. was an American success story. He came to the United States at age 12, by himself with nothing. He married Carmen and they raised five children and nine grandchildren. Alvaro became a United States Citizen and worked tirelessly to provide for his wife and children and make a better life for his family. Alvaro was the patriarch of the family. His family and friends were everything to him and
Alvaro meant everything to his family and friends.

During his successful 40-year career, Alvaro was a highly respected vineyard manager and consultant, planting and managing thousands of acres of grape vines for many well‐known vineyards and wineries throughout San Luis Obispo, Monterey and Santa Barbara Counties. He was widely known as a grape growing expert, with a strong work ethic and values and easy going style.

Alvaro was highly respected and liked by everyone in the community. He was loved deeply by his wife, children and grandchildren, neighbors, business colleagues and friends.

“Alvaro had a tremendous knowledge of farming and viticulture as well as a generous spirit,” said, Don Ackerman, Alvaro’s friend and Director of Grower Relations, Central Coast, Constellation Brands, Inc. “He was a great man and friend.” Ackerman has known the Medrano family for more than 20 years and Alvaro was his right hand man when they managed vineyards together in Hames Valley in South Monterey County.

“Alvaro was someone who led by example, with incomparable integrity and values,” said Woody Woodruff, Alvaro’s friend and Owner of Woody Woodruff Construction, Inc. Medrano recently shared with Woodruff how happy and content he was with his family, work and life. “That’s what makes this so much more incomprehensible,” Woodruff added.

“Alvaro was a mentor and inspired me to perfect vineyard management,” said John Walters, a longtime Medrano family friend who owns and manages more than 1,000 acres of vineyards in the region. “He shared his vast experience and knowledge always with humility and kindness. Alvaro was a dear friend and will be deeply missed.”

More than 1,000 of Alvaro’s business colleagues, friends, vineyard owners and concerned citizens have expressed their support for the Medrano family and called for Justice for Alvaro. For more information visit and www.justiceforalvaro.org.