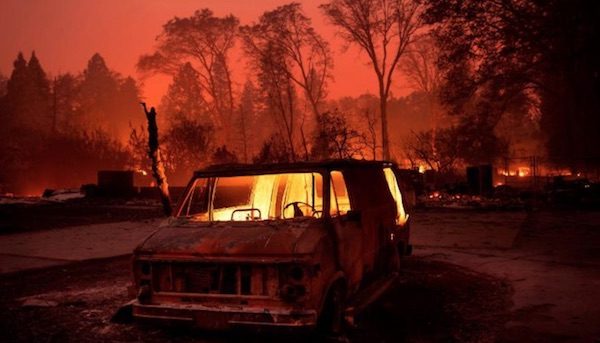 California wildfires from 2018. Photo from CNN.

– This week, the California Problem Solvers Caucus announced that they have requested $25 million in the 2022-23 state budget for wildfire response technology. The funds, combined with the $17.9 million already in the 2021 budget cycle, will accelerate the expansion and upgrade of California’s state-of-the-art ALERTWildfire surveillance and detection system. A copy of the letter can be viewed here.

“Raining ash and orange skies have become a painful reality in California,” said Senator Josh Newman (D-Fullerton). “As wildfire seasons become longer and more dangerous, we need the best technology available to support a nimble and effective fire response. The safety of first responders and the public should be our number one priority, and additional investment in this innovative program is an appropriate down payment on that obligation.”

California’s wildfires have become increasingly frequent and devastating. Eight of the state’s 10 largest fires—and 12 of the top 20—have been recorded within the past five years, according to Cal Fire. This pattern is forecasted to intensify, as a new UCLA-led study predicts longer fire seasons in the future.

“California needs innovative technologies to better address our increasingly devastating wildfires,” said Assemblywoman Suzette Martinez Valladares (R-Santa Clarita). “By expanding investments in ALERTWildfire, we can provide our firefighters and emergency responders with the tools they need to efficiently monitor and react to new fires.”

During the past five years, California has deployed more than 800 camera and sensor stations to deliver real-time, actionable data for fire detection and suppression. In 2019, during the Sonoma Kincade fire, the ALERTWildfire camera technology demonstrated its value. During the fire, approximately 170,000 people were evacuated, a historical first for such a large wind-driven conflagration.

This additional funding will augment the existing network with innovative sensors and technology upgrades, transforming the system into a state-of-the-art, multi-hazard sensor network that allows emergency crews to respond to extreme wildfires and other catastrophic events.

Through the employment of advanced data mapping techniques, the ALERTWildfire program will utilize the cameras to create a virtual dashboard for direct targeting of fuel reduction efforts year-round and more efficient firefighting during peak fire season to save lives and property.