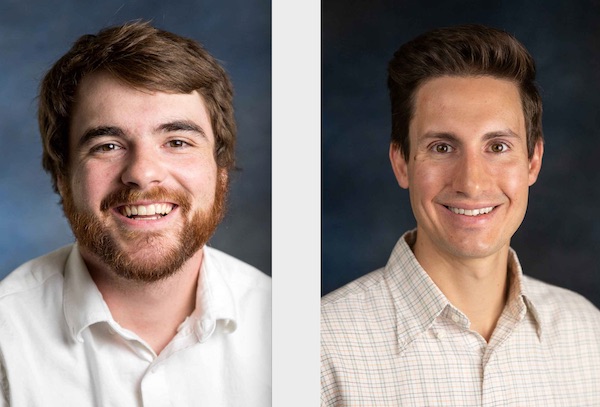 T.J. Weber and Chris Hydock, assistant professors of marketing in the Orfalea College of Business at Cal Poly.

–Political polarization has far-reaching impacts on American life, harming consumer welfare and creating challenges for leaders, from politicians and policymakers to corporate executives and marketers, says a study led by a pair of Cal Poly professors.

That’s one of the conclusions of a new scholarly paper co-led by T.J. Weber and Chris Hydock, assistant professors of marketing in the Orfalea College of Business, and co-authored by researchers from five other universities across the country. The paper, published in January, appears in the Journal of Public Policy & Marketing of the American Marketing Association.

“In a polarized society, politics tend to infiltrate all aspects of life, because every American is inherently a consumer and most are also employees,” said Weber, who is the Orfalea College of Business’s Richard and Julie Hood Assistant Professor of Marketing. “From how people are hired to which companies they choose to purchase from, political identities are increasingly a primary factor in every type of decision making.

“This paper was motivated by a need to understand just how far-reaching these effects are and how marketing can be used to reduce them and make society a less divisive place.”

The co-authors developed their findings by analyzing existing research to advance their understanding of several current trends and point to areas of future research.

“We used a review of a large body of existing literature to develop new insights that could not be reached by simply reading the results of any one paper in the larger body,” said Hydock, who in the research looks to impact both theory and practice while promoting consumer interests.

Other contributors are Dave Sprott, dean of University of Wyoming’s College of Business; William Ding of Southern Connecticut State University; the University of Delaware’s Meryl Gardner; Pradeep Jacob and Naomi Mandel of Arizona State University; and Montana State University’s Eric Van Steenburg. The authors observed that previous research suggesting political polarization in the nation is more pronounced than in the past — at least among members of the nation’s major political parties — with Democrats significantly more likely to identify as liberal and Republicans as conservative.

Additionally, the research suggested consumers believe more moderate, centrist political beliefs are waning. The parties overlap less than they did in previous years, and the portion of people holding extreme political views is increasing, research revealed.

Research also has shown that political identities such as Republican, Democrat, liberal, or conservative help determine people’s behavior, attitudes, and perceptions. Those identities can be reinforced by people selecting social groups with shared belief systems; consumption of media that only align with those beliefs; and even creation of a “group-specific shared reality,” the researchers wrote.

From a public policy standpoint, political polarization makes it more difficult for elected officials to effectively govern, the paper asserts. That’s the result of a number of factors: lack of trust in scientists, politicians, and policymakers; and the prevalence of misinformation.

“For instance, as society has become increasingly polarized, politicians’ objectives diverge and their animosity toward the opposition grows, thereby reducing opportunity for compromise,” the researchers wrote. “Partisan incivility is a major reason for failed dialogue: Uncivil exchanges result in disagreement and greater polarization regardless of the evidence presented.”

This political polarization also plays out in the marketplace, as consumers connect with product brands that they believe better reflect their values and beliefs.

“In effect, activist consumers will increasingly expect brands to help spur social change, and will be more likely to respond to brand actions through a political lens,” the researchers wrote. And even when companies aim to be apolitical, the nation’s polarized environment increases the chances that they will be viewed as being political, the researchers say.

“As the population becomes more polarized, initiatives that were previously viewed through an apolitical lens may be viewed as favoring one political identity over another, as a polarized population is more likely to view corporate actions through a political lens,” the researchers wrote.

Ultimately, according to the researchers, consumer welfare suffers because of political polarization in finances and personal and professional relationships, which can lead to negative repercussions at the individual level and in large scale societal issues such as public health; climate change; social justice; wealth inequality; and gun control.

The researchers offered several measures to limit the effects of polarization: reducing the spread of misinformation; using messaging techniques to try to bridge the different values of liberals and conservatives, and limiting the length of political campaigns. At the same time, they acknowledge that some level of conflict is good and natural for society and that polarization has resulted in increased voter and political participation.

“Future research should consider the possibility that while political polarization can be harmful, there may be silver linings and reasons for hope,” the researchers concluded, suggesting inquiry into “what types and levels of societal conflict result in positive versus negative outcomes.”