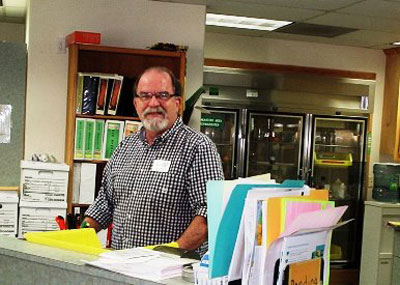 Norman Rockwell would have loved painting Brent Watson for a Saturday Evening Post magazine cover. Whether suited up in white, wearing a face mask while mixing components for prescriptions in his sterile room, or presiding over the counter at the front of his shop, he is quick to smile and demonstrate his wealth of knowledge in answering questions from patients. With the twinkling eyes of the chemistry wizard he is, Brent has loved his work for decades.

Brent F. Watson’s name is formalized by the initials, F.A.C.A and F.I.A.V.P. which stand for: Fellow of the American College of Apothecaries and Fellow of the International Association of Veterinary Pharmacists. Apothecary is an age-old term for pharmacist.

Owner of Central Coast Pharmacy Specialists at 590A South Main Street in Templeton, a licensed compounding pharmacy, Brent is one of a small group of pharmacists in the country who actually use raw materials to formulate the doctor-prescribed medicines that they dispense. Compounding pharmacies are prevented by Federal law from making any medicines that are commercially available from drug companies and are inspected annually by the state.

When I first heard the term, “compounding pharmacy,” a vivid image of my college chemistry lab came to mind – boiling beakers, acrid smells, and the wayward class genius hiding in the far corner trying to distill alcohol, while our Professor confused us all silly with never-ending formulae.

Brent Watson’s pharmacy is clean, bright and calm. With Brent, one can get a detailed and most important, a clear explanation of the pros and cons of any drug.

Central Coast Pharmacy Specialists has hundreds of patients with prescriptions for bio-identical hormones that Brent defines as, “Those hormones which are identical to the human body’s production as to chemical structure.”

Each prescription is formulated and compounded specifically for the individual.

He says the current boom in bio-identical hormone compounding is patient driven and began a decade ago with actress Suzanne Somers in her books and appearances on talk shows. On the Oprah show, she recommended testosterone for women’s’ libido and bio-identical hormones to fight the aging process.

Brent says, “The first compound I ever prepared was for my wife in 1976 when she was suffering from post-partum depression after the birth of our child.”

He researched the condition and then discussed the symptomology by phone with Dr. Julian Whitaker of Loma Linda Medical Center. He recommended that Brent administer a 100 mg testosterone troche, a tablet which dissolves in the mouth, under his wife’s tongue. Brent says, “After three doses, she was back to normal.”

Doctors have been prescribing hormones for women, primarily to assuage the effects of menopause and pre-menstrual syndrome, for decades. The most prescribed manufactured drug is Premarin, a form of estrogen made from pregnant mare’s urine. When that mass produced estrogen was found to cause uterine cancer, Provera, a chemical form of the progesterone hormone was developed to combat the effects of Premarin.

There are studies to support bio-identical hormones over manufactured chemical hormones and studies that don’t. As to the efficacy of any medical study, Brent quotes Max Kolinsky, a professor of pharmacy at University of the Pacific 42 years ago, who said, “When you read a study, find out who paid for it.”

Regarding Obamacare and its effects on his industry, Brent says that drug companies and chemical suppliers have been raising their costs exponentially, while they can, before the new law takes effect and prevents them from doing so. He gives an example of a topical steroid cream ordered by a veterinarian for a horse. He says his cost is now $276.00 for a 60 gram tube whereas a few years ago it would have been $20 or $30. Furthermore, if he was not prevented by law from compounding commercially available medications, he could do it for less than $15.

At the end of the day, in the complex and often frightening world of pharmacology and the drugs that may or may not keep us living longer, Brent Watson and the staff at Central Coast Pharmacy Specialists have become an island of solace to many.