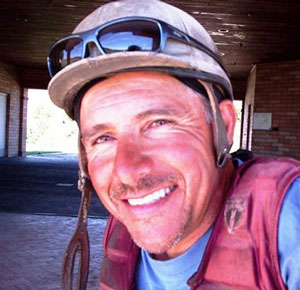 Serenity ruled as I entered the dominion of Carlos Cabello. The afternoon sun bounced off the gleaming coats of magnificent horses grazing in paddocks while choirs of enthusiastic birds celebrated the day.

Windfall Farms is 724 acres of barns and pastures designed like a Hollywood version of a Kentucky Thoroughbred horse farm. As I drove past the practice track and parked outside the humongous training barn, I almost expected a film director to rush up, scream, “Cut!” and then chew me out for ruining his shot.

Carlos Cabello came striding toward me with a gleaming white smile in a tanned face, wearing an old riding helmet, well-worn boots, jeans and a long sleeved blue T-shirt. He has the wiry build of a man who knows hard work. A firm but kind handshake, the way he smiles right into your eyes, and you instinctively trust the man.

Walking through a horse barn with Cabello is good for the soul. That day, a soft breeze flowed through the open doors carrying the scent of fresh hay throughout the huge space. We went down a walkway in the center of the stalls. Considering the fact that dozens of horses tramp through the barn daily, the place was amazingly clean.

It was obvious that he loved horses as he introduced me to the four-legged resident of each stall like they were his best friends. Every one of them was a muscular, shining, example of the Thoroughbred. I saw no fear, only curiosity. They came forward to meet me, putting their velvet noses against the wire mesh over the windows, trying to nuzzle my hand. I could see that they were used to being treated well by humans. 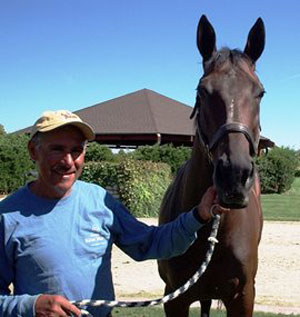 Carlos Cabello with a veteran of the race track, “Running Isabella.”

Shown in the photo is Cabello with a veteran of the race track, “Running Isabella,” a 6 year old, seventeen-hand, powerful horse who has definitely earned her keep at the race track.

Cabello has been training race horses in his own special, non-violent way for thirty years. I watched him take Running Isabella out of her stall. He said nothing at all, had the halter on in a few seconds, and was walking beside the big horse toward the door before I flicked the lens cap off my camera. It looked as if he and Isabella were communicating telepathically – maybe they were. Maybe I’d met my first real horse whisperer.

He says of the horses, “They’re like five year old children; if you know how to coax them, you can bring out the best in them. The beauty of Thoroughbreds is that they’ll put it all on the line for you. They have a lot of heart and they’re very brave.”

Although the 724-acre Windfall Farms is owned by agricultural giant Limoneira, the training center of eighty acres, which includes a six furlong race track, is operated by the Las Laureles Equine Therapy Center who employs Cabello. Las Laureles does their serious rehab work on injured horses in their Templeton facility while Carlos runs the training center in Creston.

He says, “We’re like a Prep school here. We get horses 60%-75% ready to race and then they’re off to the track at Delmar, Santa Anita or Golden Gate to complete their training.”

As we sit and chat about the 60 or so horses on the property, all in various stages of training, retirement or rehabilitation, I am reminded of the famous Winston Churchill quote, “There’s something about the outside of a horse that is good for the inside of a man.” In this case, I think the opposite applies – by the looks of the horses around us, I’d say that Carlos Cabello has proven that he’s better than good for the inside of a horse.