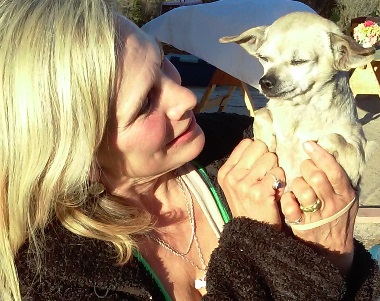 Charlotte with one of her many little buddies.

Upon closing the big metal gate leading into the oak studded domain of Charlotte Meade, founder of Meade Canine Rescue Foundation, there was an immediate hue and cry from the four-legged population on her twelve acre property. One geriatric Labrador-mix charged the car in a syncopated waddle. Clearly, age had mellowed what must have been a terrifying snarl into a  muffled squeal, but the animal’s shining coat and healthy enthusiasm were impressive.

Up a sloping driveway past one brightly colored residence with various kennels in the yard, and fifty yards beyond a modern garage, stands Charlotte’s newly built home. As I approached the fence and the property’s second gate, I had to laugh when a virtual herd of Chihuahuas ran up yapping in a concerto of greetings. There must have been three dozen grinning little critters whirling around my feet.

Charlotte appeared and magically, all the dogs became quiet. We went inside the house where only a select few dogs were permitted. When the dogs left outside the glass door began complaining, Charlotte asked them in an everyday tone of voice to be quiet and astonishingly, they were.

An extremely attractive blonde with bright blue eyes, Charlotte Meade is 50ish but looks thirty-five; is charming, intuitive, well-spoken and obviously, hard-working. She lives alone explaining, “I’ve never met anyone I cared enough about to spend my life with.” (Note to single guys: you must love dogs!)

The walls in the large front room are painted aquamarine blue and seem to disappear amongst bright paintings, comfortable chairs, a piano and a few little doggy beds. Charlotte says she plays her piano and the dogs go to sleep under it. Amazingly, the house has absolutely no dog odors. She showed me a lovely enclosed porch with doors opening onto a side yard and informed me that most of the dogs slept there but all sixty-nine of them were free to roam the property.

In between phone calls from contributors and friends in Connecticut, always holding one dog or another, Charlotte told me the story of her life. After gaining twin Masters Degrees in Archeology and Economics, from the University of London in England, she kicked around France for a while before returning to the U.S. to work as Assistant Director for Art at the elite Ann Kendall Richards Gallery in Washington, D.C.

“I never once thought about having a dog in those days because I travelled so much. We dealt in 19th and 20th Century art, buying and selling the works of painters like Picasso and Chagall. I lived in a big social whirl for seven years doing that job,” she said.

From the gallery in Washington, Charlotte moved to New York City and opened a vintage clothing store. After that, tired of city life, she bought a bed and breakfast in the Catskills.

“I started to accumulate animals and by that time – when the cats were drinking the milk on the tables in the dining room – I decided I liked animals better than people and sold the property. I went to Connecticut and bought Marc Chagall’s’ old barn of a studio that he used in the 1940’s.”

A couple of days before one July 4th weekend, Charlotte went looking for another dog to keep her one-eyed Beagle company. She happened to be in Jersey City, went to the dog pound there but couldn’t decide amongst four dogs, and told the workers that she’d be back the next day. When she went back, all four dogs had been euthanized.

“My God! How could they kill perfectly fine animals? That’s why I got involved with dog rescue,” she exclaimed.

It’s become political for Charlotte Meade. She explains that the overall cost to the State for euthanizing dogs and cats is far more than neutering and spaying would cost. Noting that many people simply cannot afford to have their animals spayed or neutered, Charlotte points to one large animal shelter in Southern California that takes in between 60,000 and 70,000 animals a year.

“They kill 60% of them,” she sadly says. “We need to reduce the dog and cat population with a State sponsored spay and neutering program,” she says. “It should be free.”

I wouldn’t be surprised to see Charlotte Meade taking her spay and neuter campaign into the political arena.

There are two Meade Canine Rescue Foundation locations, one in Connecticut and one here in Creston. For more information, please visit: www.meadecaninerescue.org.

Susannah Surgeoner is a Realtor who loves people for thirty years. Please write with comments or questions to: writersusannah@gmail.com. or call (805) 270-9067.