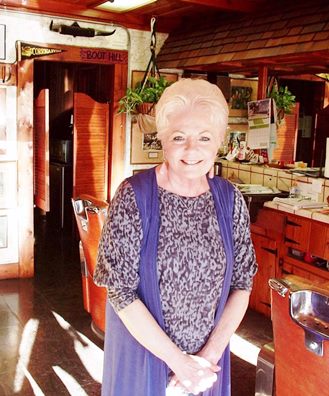 Pat Corrigan in her shop.

The slanted rays of the afternoon sun spilled through the front window into the cool interior of Corrigan’s Barber Shop giving the polished wood cabinets a warm glow. A white-haired gentleman sat calmly erect in the barber’s chair in front of Pat Corrigan who silently wielded her scissors with precision, shaping unruly locks into fashionable order. Sunbeams made a halo of her upswept blonde hair.

While waiting to speak with Pat, I studied the framed photographs of men on horseback sprinkled between old movie posters on the walls. There was a hint of reverence in the place. A haircut here was not a mere necessity; it was a manly enhancement ritual including hot towels, soft brushes and cleanly shaven necks – all for $15, or $10 for active military.

Thirty years ago, Pat Corrigan was a lady barber looking for a new life who came to Paso Robles from the San Fernando Valley with her mother and nine-year-old daughter. She landed a job in a full service salon catering to both men and women.

She says, “Back then, I was the only woman barber in a town of 12,000 people where everything closed at 5:00 P.M. At that time, I was an outsider in a backward town.” She laughs, “I even had one man come to the door and yell that he wasn’t having any damned woman cut his hair.”

When her employer’s business folded a few years later, Pat Corrigan persevered and opened her own shop in a part of the once larger salon where she’d worked.

If you didn’t know, you might assume that all the movie posters and autographed photos on the wall are just decorative copies. However, Pat is the daughter of Ray, “Crash,” Corrigan, actor and stunt man, who made dozens of films from 1936 through 1958. The posters in her barber shop are from her father’s collection of studio originals. One signed photograph shows President Ronald Reagan on horseback with Judge William Clark – Justice of the California Superior Court in Paso Robles from 1969-1971.

Before she was born, her father bought land in Southern California’s Santa Susana Mountains. With huge rock formations, ponds, pine and oak trees, it became Corriganville, a movie ranch where many films and television shows like, The Adventures of Rin Tin Tin, Fort Apache, The Robe, Star Trek and The Lone Ranger were made. As a girl, Pat Corrigan played in the shadow of famous actors who knew her father like Clark Gable, Roy Rogers, Buster Keaton and John Wayne. On weekends during her early childhood, up to 20,000 people showed up to tour Corriganville.

In the early 1960’s, her parents divorced and the ranch was sold. Today, the city of Simi Valley owns 190 acres where some of the original movie sets remain. It is open to the public and called Corriganville Park.

As retirees found Paso Robles, Pat’s clientele grew. She says she used to do up to15 haircuts a day until the earthquake in 2003.
“I’ve lost clients over the years – some moved, some died, but after the earthquake, the whole town was a mess. It took a few years to fix everything. I was pretty much starting over and then the recession hit. Business is still a bit off and on,” she says.

In her 60’s, Pat Corrigan is still a beautiful woman. She’s not a name dropper and won’t talk about her famous father and friends unless asked. I’m guessing that when she was younger, there were more than a few people holding doors wide open, waiting for her to walk into the film business.

She drives her 1983 classic Bronco to work every day – Tuesday through Saturday from 10:00 A.M. to 5:00 P.M, and looks forward to her time off with her dog and her garden. As it has been for decades, Pat Corrigan’s main interest is in making her customers comfortable and sending them out the door looking their very best.

Susannah Surgeoner has been a Realtor who loves people for 30 years. Write with comments or questions to: writersusannah@gmail.com. or call (805) 270-9067. Susannah’s website is: homesandlandsanluisobispo.com