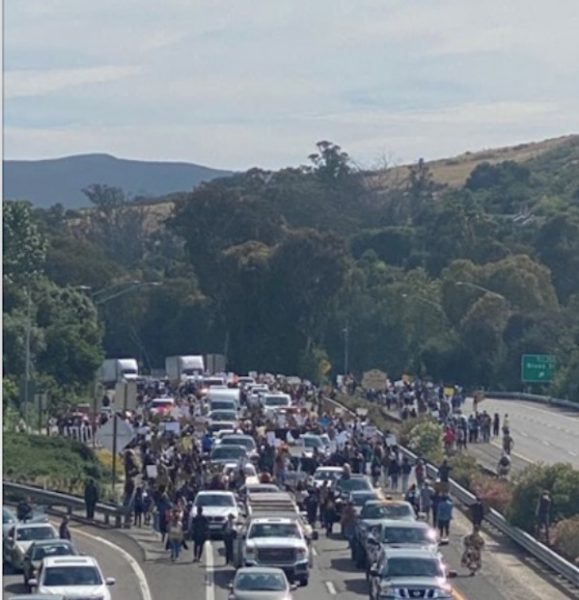 –Thousands hit the streets on Monday afternoon in the second day of protests in San Luis Obispo that have ignited due to the death of George Floyd and others while in police custody.

In the late afternoon and evening, protesters in downtown San Luis Obispo overtook Highway 101 and the road was closed in both directions. By 5 p.m., the crowd had returned to downtown. Hours later, the protest ended in a clash with police, who used tear gas in an attempt to disperse the crowd. Arrestes were made. Multiple businesses in downtown San Luis Obispo were later vandalized in the late-night hours.

Today was a challenging day for San Luis Obispo. The City of San Luis Obispo Police Department, in coordination with regional law enforcement agencies, worked to support the peaceful expression of protesters’ statements.

Nearly 1,500 protesters marched through Downtown and were largely peaceful. Officers and allied law enforcement agencies knelt with protesters out of honor and respect and in support of racial justice.

Protesters pushed through law enforcement lines and marched onto Highway 101 causing grave concerns for the safety of marchers. Fortunately, no one was injured, and high-speed traffic was detoured.

A law enforcement line was established to prevent protesters from entering Highway 101 and they were ordered to disperse. Law enforcement resources were stretched thin as there were various reports of planned property damage as is being experienced in other communities throughout California.

Mayor Heidi Harmon said “ I am calling on all members of our community for peace and calm. We are a caring and compassionate community. I feel the agony and despair from the inhumane and cruel death of George Floyd. I deeply respect and support the protesters fight for equality and justice and the right for all people to come together peacefully to advocate for social change.”

She added “ Several storefronts in San Luis Obispo have been damaged tonight and there is so much rebuilding that our community needs to do. We will get through this challenge as we have others – through working together and caring for each other and our community. Please, be safe and care for SLO”.