– Dozens of protesters held a “Don’t Tax the Sun” rally on Tuesday in San Luis Obispo. The group marched to the office of Pacific Gas & Electric on Higuera Street.

It was part of a statewide effort to protest proposed changes by the California Public Utility Commission (CPUC) that would significantly increase the cost of using rooftop solar panels.

“We showed up at the PG&E office to deliver a simple message and highlight the fact that PG&E and the other utilities have been the mastermind behind the anti-solar tax making its way through state government,” says Carter Lavin with California Solar & Storage Association.

“We’re calling on PG&E to cease and desist with the solar tax,” he said. “There are 1.4 million Californians who have solar. We need to make solar easier and more accessible for more people. We need to not tax solar,” 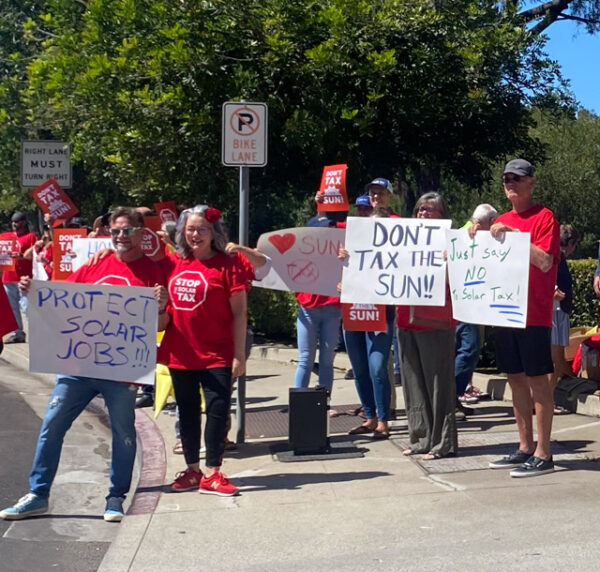 The rallies have been scheduled from July 19 to July 29 and include stops at utility offices in San Diego, Coachella Valley, Bakersfield, San Luis Obispo, Fresno, Santa Cruz, and Chico. The rallies were organized by Save California Solar.

“The CPUC is currently considering utility-proposed changes to ‘net energy metering,’ the state policy that makes rooftop solar more affordable for consumers of all types by compensating them for the excess energy they produce and share with their neighbors,” according to the solar industry association.

“Big utilities want to change the rules in their favor in order to eliminate a growing competitor, keep consumers stuck in utility monopolies, and maintain the need for costly and often dangerous transmission lines that are a key driver of utility profits and ratepayer costs.”

“By contrast, solar supporters want to keep solar growing and affordable for all types of consumers, ensure California remains on track with its clean energy and land conservation goals, and accelerate the growth of solar plus storage to build a more resilient electric grid,” according to the solar industry association.