I’ve known of Brigit Binns for several years and have been fortunate to interact with her a few times. She is an accomplished cookbook author, cook, traveler, and is married to the one and only, Paso Wine Man, otherwise known as Casey Biggs. Brigit and Casey started Refugio Paso Robles which has two vacation suites as well as a beautiful kitchen. The kitchen can not only be rented for private and corporate events, dinners, and meetings but it’s also where Brigit holds cooking classes.

What happened to make food something beyond simply eating? 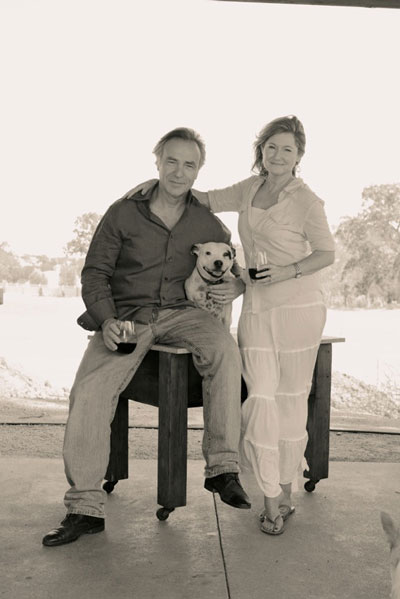 While in high school, I went on an Outward Bound-like, 350-mile hike in the Grand Canyon. During that time, I did the requisite late 70’s thing: a 3-day “solo” with only a tarp, sleeping bag, trail mix, and a nearby creek for water. I also had a journal. I wrote pages and pages to my mother, mostly about her lamb stew and her cheese soufflé. It didn’t take me long to realize it was something else entirely that I was writing about. That’s when I knew that food meant something more to me than just sustenance. (Although admittedly, I was pretty hungry at the time.)

Where are you from originally?

I was born in Santa Monica and spent my early years in Brentwood. At 14, I was off to boarding school with every intention not to return any time soon—urban Los Angeles was not for me. The only good part of this era was the vacations and holidays spent at the Hollister Ranch north of Santa Barbara. Now that was my kind of place.

Where all have you lived in your life and has food been a passion/career in all of those places?

Portland, OR: College in on the 5-year plan; collected $2/each from off-campus roomies and created my first original dish: broiled chicken breasts with garlic, butter, and lemon (aka “Binns’ Breasts).

London and the South of England: Seven years on the periphery of the investment banking world; attended a 6-month professional cooking program, learning to make steak & kidney pudding, lemon meringue pie, and every sauce and braise and roast and dessert known in classical French cuisine. Many vacations in France and Italy, where I learned to travel according to the red Michelin Guide.
Southern Spain: Three years, catering private dinner parties on the Costa del Crime—er, Costa del Sol. Cultivated exotic lettuces and herbs then unavailable in the region. Created a sourdough starter and baked rustic loaves twice a week (the Spanish bread was terrible).

Upstate New York: Five-ish years (no winters, of course); writing more cookbooks, creating and cultivating my “cult” blog Roadfoodie, as I drove back and forth across the country twice a year to escape the winters. Developed a passion for hearth cookery which I still feel just as strongly today. Began consulting/recipe development with Weber Grills. Today Show appearances # 2 and 3. 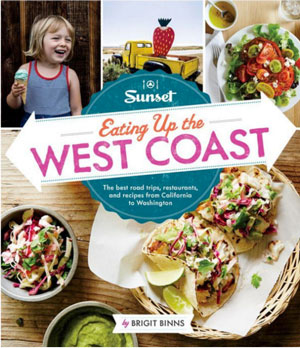 Sunset’s Eating Up the West Coast by Brigit Binns.

This is it. I couldn’t imagine a better place to eat (cook), drink, and be married. Working on book # 30. It’s very wine-centric. Smile.

How many books have you written?

Twenty-nine. But who’s counting? It’s spilt about 50/50 between ghost-writing for chefs and solo, Brigit-books. More chef books when I was starting out; more solo books recently. You could say I broke into the cookbook-writing field by pretending to be a male German chef.

What brought you to Paso Robles? How long have you been here?

Officially, I first came in early 2010 to research a cookbook focusing on the incredible ingredients and great wines of the region. I lived at 20th and Oak for six weeks and fell in love. (Don’t tell my husband, but even before that I already knew I wanted to move here permanently.) By Thanksgiving of 2010, we had a lease-option on a house and I was packing. So it’s been almost 5 ½ years. Though it took him a bit longer to get here full-time…

Do you have a favorite style of food?

This changes all the time, but rustic is always good for me. Currently I’m having a “French year,” in preparation for a trip to Provence this summer. Italian is also a fave.

What is your philosophy on food/cooking?

Don’t get crazy. For guests, cook what you know. For health, eat what you love, within reason and in small portions. Buy dessert or make it the day before.

Do you have a favorite current food and wine pairing?

I have always been partial to Grenache Blanc (especially Amy Butler’s). Since this is my French year, I’m cooking lots of very flavorful chicken dishes. For this wine, I like a whole roast chicken with a soft herb butter rubbed under the skin. Chives and flat-leaf parsley, maybe a smidge of tarragon. The best butter available, of course.

Best advice to someone that wants to get more into cooking? Possibly some beginner advice?

Remember that cooking from scratch is the best way to control what you put into your body—and your family’s. Processed foods are full of bad and semi-bad ingredients that are totally un-necessary. Keep in mind your local farmers and food producers—you’ll be supporting the local economy. If you’re a beginner? Read through the entire recipe before you start cooking!

What do you love most about life in Paso Robles? 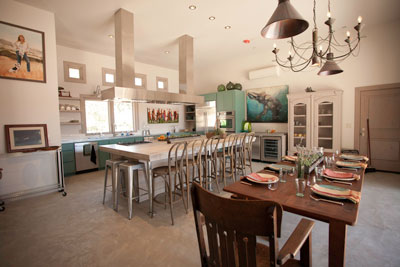 The views. The changing seasons. The passion of the winemakers. The feeling of being in the “old California” of my youth. I could go on…

If you had to describe your goal with Refugio in one sentence, what would that be?

My husband and I set out to create a gracious space where people could cook, learn, sip great wines, and exchange stories.

About the author: Matt Browne

Matt Browne is a social media consultant, writer, and owner of the popular blog sites at www.ThreeAdventure.com