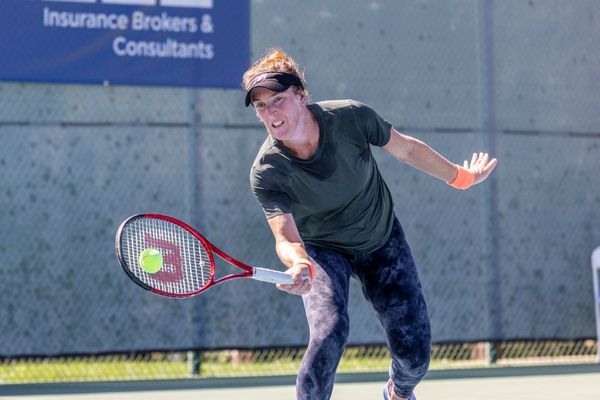 Ukraine’s Kateryna Bondarenko and Washington D.C.’s Robin Montgomery won straight-set quarterfinals at the USTA Pro Circuit Women’s $60,000 tournament just north of San Luis Obispo and a few miles south of Paso Robles. It was the fifth singles win in five days for Montgomery, and the eighth match overall in five days for Bondarenko, who fell in Friday’s doubles late semifinals.

Serving down 5-6 and 15-40 and facing two set points in the first set against No. 2 seed Yue Yuan, the 36-year-old mother of two Bondarenko used her big serve to get her back deuce and force a tiebreaker. In the breaker, Bonaderanko fell down 0-4, but rallied back with five straight points and took the tiebreaker and eventually the match, 7-6 (5), 6-4.

Montgomery had little trouble beating No. 7 seeded Katarzyna Kawa from Poland on Friday. The 6-3, 6-1 win marked the best result at a pro event for Montgomery, who had been to one other $60,000 quarterfinal in her career.

“No, I didn’t think about that,” said Montgomery after the match. “It’s great.”

Asked if she’s playing some of the best tennis of her young career, Montgomery quickly replied, “No. I can always play better. I’m just trying to improve and get better.”

In Friday’s featured evening doubles semifinal, Nao Hibino of Japan and former USC All-American Sabrina Santamaria, the tourney’s No. 2 seeds, booked their ticket into Sunday’s doubles final with a 6-4, 6-4 win over the unseeded team of Bondarenko and Hiroko Kuwata of Japan.