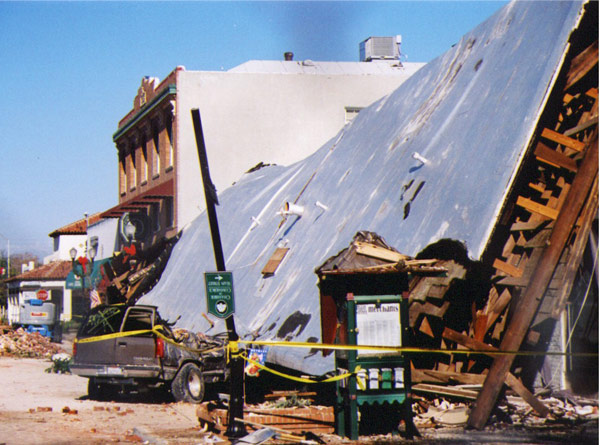 –The 2003 San Simeon earthquake happened 13 years ago today, at 11:15 a.m. on Dec. 22. The 6.6 magnitude quake struck about 7 miles northeast of San Simeon. The quake caused major damage to some 46 structures and tragically killed two people in Paso Robles.

Jennifer Murick, who was 19, of Atascadero, and Marilyn Zafuto, who was 55 and from Paso Robles, were killed by falling debris from the collapse of The Acorn Building, an unreinforced masonry building built in 1892 that included the city’s landmark clock tower. 40 other people were injured from the quake.

Other unreinforced masonry buildings, some more than a century old, in the city’s historic downtown area also had extensive damage. However, none of the buildings that had even partial retrofitting collapsed, according to CNN.

City officials said businesses and homes near downtown were destroyed by the quake, which ruptured gas and water lines. They urged residents to use bottled water for drinking and cooking.

Two sulfur hot springs in Paso Robles erupted after the earthquake. One was underneath the parking lot of Paso Robles City Hall. Hot water and sediment were released at a rate of about 1,300 gallons per minute, forming a large sinkhole. There was formerly a bath house at the location and the spring was capped after it closed down. Another hot spring flowed out of the embankment at the Paso Robles Street exit on U.S. Route 101, spreading a heavy sulfur smell over downtown.

The earthquake was felt as far away as Los Angeles. It was the most destructive earthquake to hit the U.S since the 1994 Northridge earthquake.