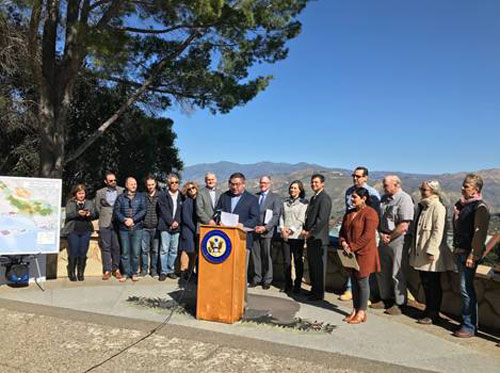 “Protecting our environment, enhancing public safety and growing our economy are not mutually exclusive. The passage of the Central Coast Heritage Protection Act proves this, and it’s a huge step forward for all of us,” said Rep. Carbajal. “Our Central Coast is the most beautiful district in the nation and this bill ensures our public lands, like Los Padres National Forest and Carrizo Plain National Monument, will be preserved—for our economy, for our environment and for future generations.”

The bill, which is now headed to the Senate, has support from a coalition of around 500 Central Coast businesses, environmental and farm organizations, landholders and leaders, according to Carbajal.

–Today, Rep. Salud Carbajal (D-Santa Barbara) introduced California’s Land Preservation and Protection Act to place a moratorium on fracking and new oil and gas drilling on federal lands on California’s central and southern coasts. This is direct pushback on the Trump administration’s decision allowing the Bureau of Land Management (BLM) to pursue oil and gas leasing on over 1.2 million acres of California land, including San Luis Obispo, Santa Barbara and Ventura counties. Rep. Julia Brownley (CA-26) is an original co-sponsor of this bill.

“We cannot stand by as the Trump administration pollutes our environment and auctions off our public lands, health, safety and economy,” said Carbajal. “My bill will stop the Bureau of Land Management from proceeding with any oil and gas activities that are detrimental to our environment, it promotes comprehensive research and it enhances environmental justice in our communities. The health of our Central Coast public land is key to the health of our communities—we will not be exploited by this administration and special interests.”

“In Ventura County, we pride ourselves on being good stewards of the environment,” said Congresswoman Julia Brownley. “The Bureau of Land Management has a responsibility to protect our public lands for future generations, but its recent actions to open up lands for drilling and fracking, including in Ventura County, are at odds with that mission. I am proud to be a co-sponsor of the California’s Land Preservation and Protection Act because our public lands must be protected from the harmful impacts of drilling and fracking.”

On December 12, 2019, BLM announced the decision to allow for new oil and gas leasing in California. Shortly after, the Trump administration faced lawsuits from the state of California, Los Padres ForestWatch and Center for Biological Diversity.