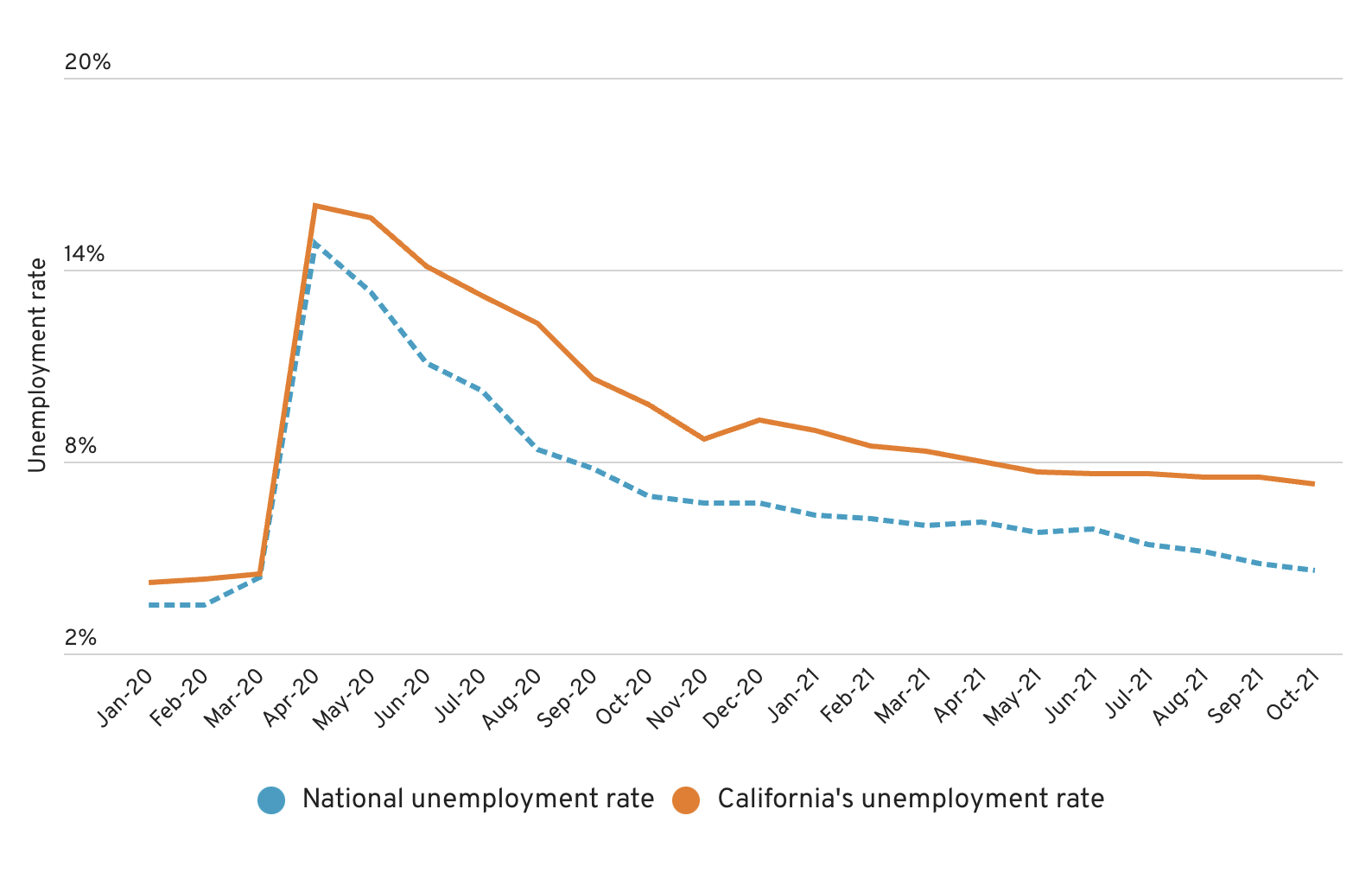 –Nance Parry says she’s sent out more than 1,000 resumes since she got laid off in September 2019. She’s gotten one interview.

Just five weeks into what Parry thought would be a six-month contract, she was laid off from a job as a document specialist for an engineering firm. She says she’s sent out two to three resumes per weekday since but that’s netted a grand total of one interview, leaving her to live off of a monthly $1,200 Social Security check, $1,030 of which is used to pay rent for her apartment in Duarte.

“I’ve tried to survive, you know, paid bills and food and everything on $200 a month after the rent is paid,” Parry said. “I need to work.”  She needs new glasses and electrical work done on her car, but won’t be able to pay for either of those things until she gets a new job. Her landlord has tried to evict her three times, she says, and she’s worried about what will happen when LA county’s eviction protections end in January 2022.

“I don’t know if I’m going to end up living in my car or what because without a job you can’t get an apartment,” she said.

Parry is one of roughly 1.4 million Californians who are out of work and looking for jobs. In October, according to the U.S. Bureau of Labor Statistics, the state recorded a 7.3% unemployment rate, the highest in the country, a distinction California shares with Nevada. October’s national unemployment rate is several points lower, at 4.6%.

One contributor to the state’s lagging employment situation is that California’s large leisure and hospitality sector — made up of hotels, restaurants and more — hasn’t rebounded as quickly as the rest of the country’s. But other data suggest the news isn’t all bad: There are lots of job openings and workers are quitting their jobs in droves, which is often a sign that people are optimistic they can find a better job.

Why is California’s jobless rate bouncing back more slowly?

Even pre-pandemic, California’s overall unemployment rate was usually slightly above the national rate. But the fact that so many Californians work in the leisure and hospitality industries — which saw massive layoffs in the beginning of the pandemic — contributes to the state’s lagging employment recovery now. Leila Bengali, an economist at UCLA’s Anderson School of Management, pointed out California’s leisure and hospitality sectors employed almost 18% fewer people in September 2021 than pre-pandemic, according to data from the Bureau of Labor Statistics. Nationwide, the industry was just 9% smaller in September than it was pre-pandemic.

One explanation for the gap between the rate at which California’s leisure and hospitality industry has recovered jobs and the rate at which the industry has recovered jobs nationally,  Bengali said, is that international tourism, a large part of the state’s economy, was particularly hard hit during the pandemic. Visitors buy lunches at cafes and stay in hotels; when travel dried up, those businesses bore the brunt.

“If you lived in East LA, but you got on your bike and a bus to get over to Beverly Hills to work in a restaurant, or to clean a house or to take care of kids, a lot of that demand disappeared,” said Pastor.

Yes. Walk down any commercial strip in a California city and there’s a decent chance you’ll see a ‘Now Hiring’ sign in a restaurant or shop window. Employers have been offering cash bonuses and beefed-up benefits to fill empty positions.

California’s unemployment situation “certainly isn’t a question of a lack of job opportunity; that’s not what’s going on,” said Chris Thornberg, founding partner of Beacon Economics, an economic research and consulting firm. “There are an insane number of job opportunities in our state and in the nation overall.” People may just be taking their time to find a good job, he said.

There are also some indications that lower-income families aren’t experiencing economic stress, said Thornberg. For example, the share of Californian consumers with new bankruptcies is lower than it was pre-pandemic.

A lot of the job openings also require in-person, physical work with unpredictable hours — like serving in a restaurant, or packing goods in a warehouse. Some people aren’t willing or able to do that work.

Parry is worried about working in person while the pandemic is ongoing. “I keep seeing signs in restaurants and stuff like that, it really makes me feel bad because I need work,” she said. She worked at Cost Plus over the holidays once in the past, and it made her legs hurt.  “I am 71 years old,” she said. “I mean, the last thing I want is a job where I stand all day because it kills the legs and the back.”

“I think right now we’re seeing a lot of people move out of retail, leisure and hospitality and start looking for other employment,” said Somjita Mitra, chief economist at the California Department of Finance. Unpredictable schedules make it hard for workers in those industries to find child care and use public transit to get to work. “There’s going to be some structural changes in those industries long term,” she said.

It’s not all bad

Compared to California’s jobs recovery after the Great Recession — when unemployment peaked around 12.6% and took more than four years to get down to the state’s current 7.3% unemployment rate — the state’s post-pandemic recovery has been a roaring success. During the pandemic, unemployment in the state crested at 16%, but just a year-and-a-half later, that number had fallen by more than half.

If workers are holding out for jobs that better match their needs and goals, that can prompt employers to increase wages for the lowest wage workers, for example, or offer them more stable schedules — concessions that are good for the economy, said Irena Asmundson, managing director of the California Policy Research Initiative at Stanford Institute for Economic Policy Research and former chief economist for California Department of Finance.

“Our economy really does work better when we have more of a balance of power between employers and employees,” Asmundson said.

When will the unemployment rate come down?

A May 2021 report from the Department of Finance projected that California’s unemployment rate would return to pre-pandemic levels in 2024.

A new report from UCLA Anderson Forecast predicts that California’s unemployment rate will fall to an average of 5.6% in 2022, and will drop further to an average of 4.4% in 2023. Authors Jerry Nickelsburg and Leila Bengali also expect job growth to slow in industries with a lot of personal contact, and in sectors that cater to tourists.

It’s unclear if California’s pre-pandemic jobless rate of about 4% was sustainable, said Asmundson. There’s a sweet spot, she said, and while economists disagree on exactly what that sweet spot is, she puts it at 5% for California. She predicts we will get to that rate in mid 2022.

Other economists think we shouldn’t worry about the unemployment rate.
“Who cares?” asked Chris Thornberg. “People shouldn’t care,” he said. The more important question, he said, is whether there are job opportunities for people. “The answer is yeah, more than ever before.”