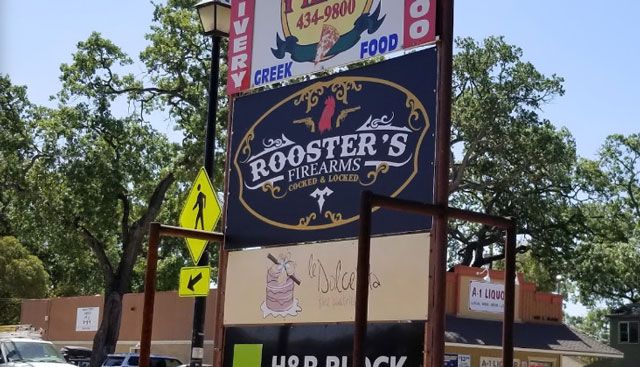 –On Sunday at 3:30 p.m., San Luis Obispo County Emergency Services Director Wade Horton announced that he had consulted with the San Luis Obispo County Sheriff, and determined that firearm shops may remain open, though the shops had originally been specifically listed among businesses to close their physical locations.

“Following a conversation with our Sheriff Ian Parkinson, licensed firearm retailers will be allowed to continue operation, given that they maintain social distancing requirements to protect their customers,” Horton said.

He added, “We have received hundreds of questions through our call center on what is considered an essential business and what’s not. We will be updating the guidelines for businesses, employers, and employees today.  It will be available at ReadySLO.org.”

Other cities and counties in California have ordered gun stores closed with COVID-19 shelter at home orders, including San Jose, San Francisco, and Alameda counties.

In response to a clear need to reduce the spread of COVID-19, business closure orders have been issued at a state and local level. A number of businesses have been deemed essential by the governor’s office and county officials and are operating, such as grocery stores, pharmacies and gas stations.

Other businesses such as hardware stores and golf courses have also been allowed to remain open because they were deemed essential to the overall health and welfare of the community.

The Sheriff’s Office believes licensed firearms dealers are also a vital and essential business. Citizens have a constitutionally guaranteed right to protect themselves and their loved ones, especially in times of crisis.

As with all businesses currently operating, we urge firearms dealers to enforce social distancing and proper hygiene in their place of business.

Rooster’s Firearms on Saturday was crowded with a full parking lot and 30 people in line inside the store waiting to buy guns and ammunition, reports Richard Bastian in Cal Coast News.

“When asked why he was open following the shelter at home order, (the owner) said he was selling protection to law-abiding people,” the report says. At Uncle Ed’s Outfitters, “an employee… who refused to divulge his name, (said) the undersheriff said their store could remain open because his Second Amendment rights.”

On its Facebook page, Rooster’s Firearms says, “The county has deemed us an essential business,” though this statement is in conflict with the text of the county’s order to Shelter at Home, which specifically identifies “firearm stores” on its list of “businesses to close their physical locations.” Uncle Ed’s Outfitters also said on its Facebook page that it is, “deemed essential.” 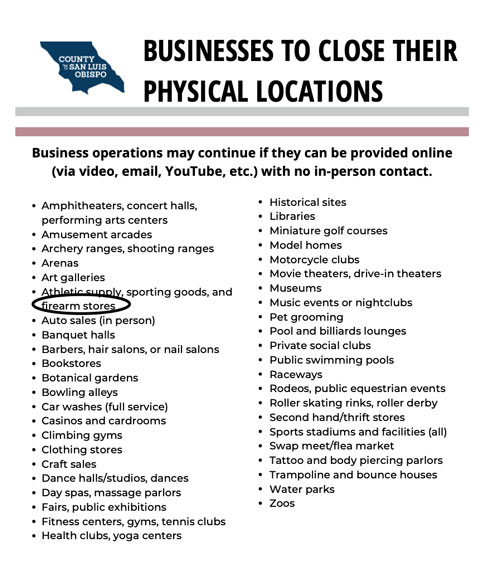 The San Luis Obispo County Sheriff’s spokesman, contacted for comment and clarification of the issue, was not immediately available Sunday morning. Updates will be posted as they become available.