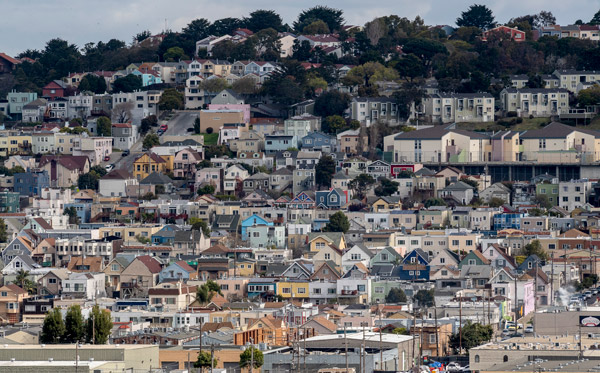 A sea of homes are photographed from Bayview Park in San Francisco, on March 9, 2021. The city saw rental declines, leaving some landlords struggling to make their mortgage. Photo by David Rodrigues, The Salinas Californian/CalMatters

At the start of the pandemic, Brandon McCall’s two tenants ran into financial trouble. One had surgery and went on disability, which tightened his purse strings. The other, who works in entertainment, was laid off almost immediately and wasn’t eligible for unemployment as a contract worker. With a limited amount of cash coming in, McCall said the two of them stopped paying rent on his Van Nuys condo in Los Angeles.

McCall looked into mortgage forbearance but decided to pass when he learned it would impact his credit. He would also have to pay in full after his deferral period was up. Unsure when the tenants would start paying again, McCall and his wife dipped into savings to cover the mortgage on their condo even as they rent elsewhere for work.

Throughout the past year, small landlords such as the McCalls have struggled to pay their mortgage when tenants became unable to pay. The state plans to provide some relief by using $2.6 billion in federal assistance as rent subsidies to pay landlords 80% of unpaid back rent of low-income tenants between April 2020 and March 2021. In exchange, landlords must agree to forgive the remaining 20% in back rent and agree not to pursue evictions.

The state rent relief program will not help McCall’s tenants, though; they make too much to qualify. Still, he said, he has been trying to help, connecting them to other relief programs and even putting them in touch with a local councilperson who might be able to offer assistance.

He is not contemplating eviction of his tenants, who have since gotten on a payment plan and are catching up on rent, citing his belief in the importance of affordable housing. But a number of small landlords are in the same boat as McCall: pinched from both ends, and wondering how much longer they are going to be able to float their own lives as well as their investment properties.

Unlike the 2008 housing crisis when subprime lending triggered a wave of foreclosures, experts say property owners have fared surprisingly well during the pandemic. Homeowners, especially, have been assisted by low-interest rates and federally mandated mortgage forbearance. Edward S. Gordon Professor of Real Estate in the Finance Division at Columbia Business School Tomasz Piskorski estimated that some 60 million borrowers absorbed about $70 billion in debt during the pandemic.

However, not all small property owners have been able to take advantage of government relief even as they absorb the costs for renters.

“There are some landlords that will struggle to pay their bills because they aren’t receiving rent from tenants, or have units sitting vacant,” said Zillow economist Jeff Tucker. “It’s not like a larger property management company that can manage units and mostly muddle through. For a smaller-scale landlord with only a handful of rental units, they could easily be forced to sell their rental units or be foreclosed on if they have a mortgage on it.”

According to the 2015 American Housing Survey, nationally, about individual investors own 22.7 million units, accounting for a little under half the total number of rentals. Individual investors are more likely to own single-family homes or duplexes. About 70% of the rentals in LA are five units or less.

In large cities like San Francisco, rentals saw declines of 8% or 9% year over year. While low-income workers were more likely to be laid off and moved out to cut costs, wealthier renters, including a record number of millenials, ditched renting to become first-time homebuyers.

Desperate to get people in the door, landlords, many with mortgages on the properties they rent out, began offering months of free rent, free gym memberships and hundreds of dollars in gift cards to new renters.

Diane Robertson, a founding member of Coalition of Small Rental Property Owners, an LA-based grassroots organization that advocates for small landlords, worries about the future of rentals for small landlords. She founded the group after the state passed an eviction moratorium in 2020.

Noni Richen is the board president of the Small Property Owners of San Francisco Institute, a nonprofit that aids small, local landlords. Most members are retired, and many live in a duplex, renting out the other apartment so they can make their mortgage payments or supplement their Social Security.

In December, a San Francisco landlord wrote to Richen, begging for assistance. She had received certified letters from her lender threatening foreclosure.

The woman, who had owned and managed two properties for 20 years, skipped three mortgage payments to save up for property taxes when a tenant stopped paying rent and she couldn’t evict them due to the pandemic, Richen said.

“Do you know if it’s legal for banks to foreclose during this pandemic,” she asked Richen. “Is there any relief that you know of for landlords?”

Other landlords have written to Richen with similar problems.

The threat of foreclosure isn’t just hurting landlords, it’s also hurting tenants, Richen said. Not only is the landlord facing a financial setback, her tenants may not have a place to live.

When the landlord is a renter

McCall is one of those landlords.

In December, he got an email from his landlords’ property manager that said their daughter would be taking over the management of their properties. It requested that McCall and his wife move out within 60 days.

McCall provided a copy of the email to CalMatters and The Salinas Californian. His landlord did not immediately return a request for comment.

With no cause of eviction listed, McCall initially refused to vacate the property, though he and his wife are considering moving out. Still, he said, it was uncomfortable being on both sides of this: potentially facing eviction while using his own savings to cover for tenants who still haven’t caught up on rental payments.

Robertson said problems like the ones McCall is facing are a result of lawmakers discounting the needs of landlords, who may go into foreclosure. Even though the powerful California Apartment Association backed the eviction moratorium deal covering 80% of back rent for low-income renters, Assemblymember Laurie Davies, a Laguna Niguel Republican, said landlords would still be on the hook for insurance, property taxes and maintenance costs. The deal also doesn’t cover many renters who made decent wages before the pandemic.

“I think, at the end of the day, landlords are not anti-renter,” Robertson said. “We want solutions that benefit both sides. I do think, though, that landlords want to be made whole.”

Slipping through the cracks

Under the CARES Act pandemic relief bill passed in April, federal lenders are required to provide 12 months of forbearance to homeowners unable to make their mortgage payments due to COVID-19. Since it would not count as delinquency, it helped keep people housed during the pandemic and kept foreclosures low.

Still, some property owners slipped through the cracks. Because the federal moratorium only applies to federal lenders, state or local lenders, such as local banks or credit unions, have continued to foreclose on landlords.

Under the Biden administration, California homeowners might see an extension of the forbearance provision, which could help some landlords who have lost out on rent. Economists say the share of homes in forbearance — about 2.5 million — hasn’t fallen much since October, indicating that those in forbearance have continued to renew out of necessity.

Meanwhile, landlords like the McCalls hope to avoid forbearance by waiting it out.

“At this point, we’re just a few months away from running out the clock on their 12 months,” Tucker, the Zillow economist, said. “That is going to loom large as a policy challenge this spring. Frankly, there’s a very good chance the simple solution is to kick the can down the road three or six months…but it’s a challenge.”

This article is part of the California Divide, a collaboration among newsrooms examining income inequality and economic survival in California.