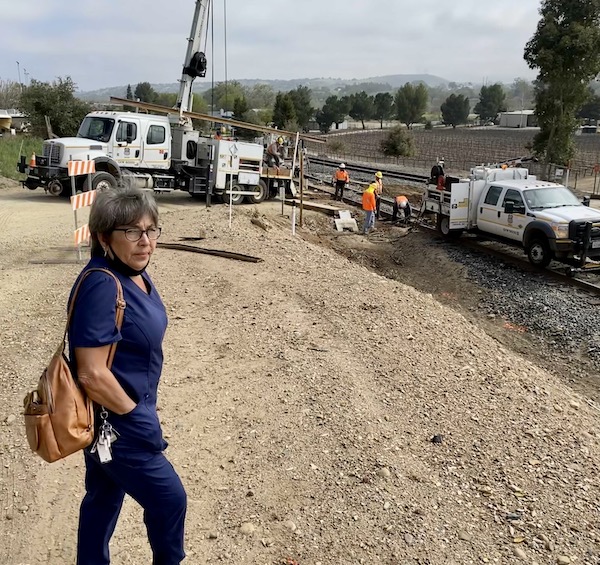 Robin Whitford cares for two older veterans who live in a mobile home in the neighborhood.

–Work on the Union Pacific tracks through Tempelton has blocked an access road isolating several dozen people on a tract of land between the railroad tracks and Salinas River. There is one other access road, but a resident has blocked it with rocks and logs, so people who live in homes and mobile homes east of Brewer Street are isolated in their homes. They can walk out, but most did not move their cards on the Templeton side of the tracks, so their cars are trapped behind the railroad work. 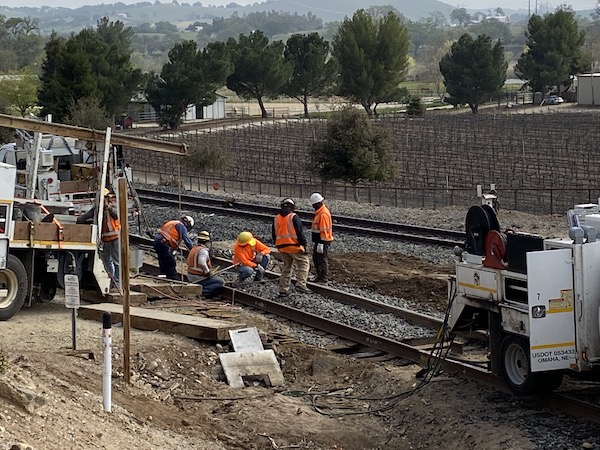 “Our homes are inaccessible for 3-5 days. I didn’t know it was going to happen until Tuesday morning,” Resident Randy Miller said. “They posted some small placard signs down by the crossing that say they were going to it. The signs were modified to make use for this event. I had a medical issue Tuesday night, and I had to ask my neighbors for help to get me out. They say they’ll be gone Thursday night.”

Robin Whitford cares for two older veterans who live in a mobile home in the neighborhood. “There’s about 15 residents and all their kids who live there, and they’re not able to get their kids to school,” she said. “They weren’t notified to move their cars across the tracks, so they’re stuck in their homes. It’s ridiculous. The older veteran I care for was unable to get out to get his second COVID shot. It’s ridiculous.”

Union Pacific says the work will be completed as soon as possible.