Restaurant races to raise funds for Tour of Paso 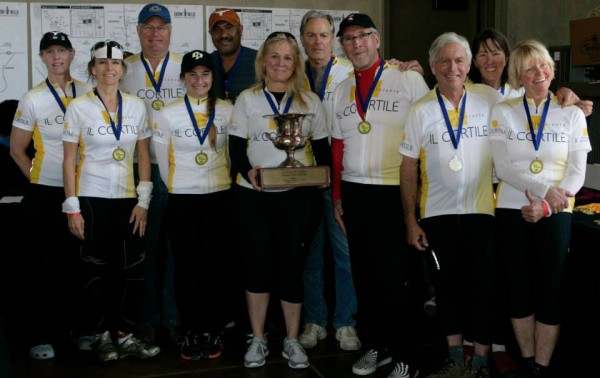 Founders Team trophy winners, the Il Cortile team, will be vying for another first place finish for the 2015 Tour of Paso. Courtesy photo

Hoping to repeat its success last year in raising money for cancer research, the team at Il Cortile Ristorante in Paso Robles will once again race to raise funds at the upcoming annual Tour of Paso cycling event on March 21, 2015.

The Tour of Paso is a cycling race for which participants raise funds for work performed by the Cancer Support Community, a resource serving local cancer patients and their families. In 2014, Il Cortile won first place in funds raised by contributing $22,000, with total contributions from the tour exceeding $100,000. This will mark the fourth year that members of the Il Cortile staff have formed a cycling team, which includes owner and managing partner Carole MacDonal.

To celebrate and raise funds for Il Cortile Ristorante’s cycling team, chef Santos MacDonal and his kitchen will craft a special “reverse wine dinner” menu to complement a bottle of LXV 2013 Crimson Jewel at the restaurant on March 11. Chef Santos will prepare a three-course menu around the bottle of wine for $45 per person plus the cost of the wine. Il Cortile servers will also be generously donating a portion of their tips from the dinner toward the Il Cortile cycling team and the Cancer Support Community.

“The Tour of Paso and the Cancer Support Community serve a population that is close to our hearts at Il Cortile,” said Carole MacDonal. “Our team has had a wonderful time getting involved and showing our support in previous years, and we’re certain this year will be better than ever. Collectively, we ride for many survivors.” Reservations for the reverse wine dinner in support of the Il Cortile Cycling Team can be made by calling the restaurant at (805) 226-0300.