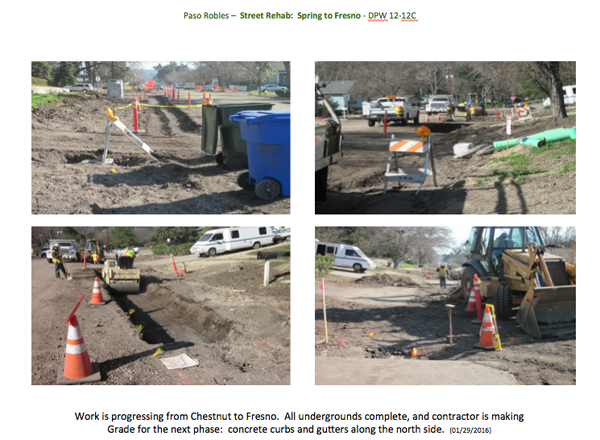 –Multiple road improvement projects throughout the city are progressing, according to Capital Projects Engineer Ditas Esperanza.

On 12th Street from Spring to Fresno, the first lift of paving was completed at the end of the year from Vine to Chestnut. Work has moved from Chestnut to Fresno. As shown on the attached photo, utilities from Chestnut to Fresno have been installed and the contractor is now working on grading and preparing for the placement of concrete curbs, gutters, bio-swales and pavers along the north side.

NOTE: The curb ramps at the west side of Vine Street have NOT been done. They want to do that portion when they are ready to re-construct the entire intersection of Vine and 12th . They want to wait when there is an extended window of dry weather so that they can complete the work quickly with minimum impact to traffic. 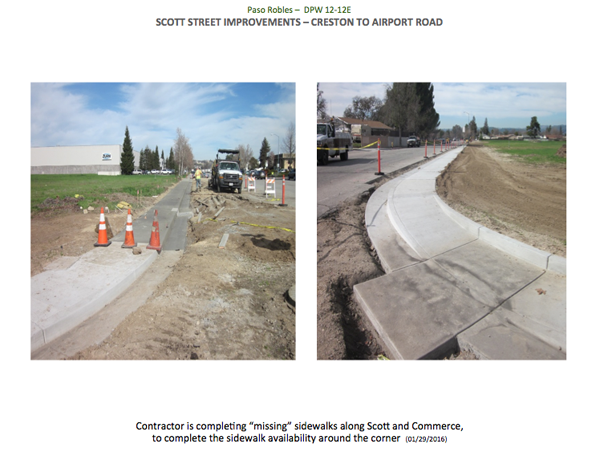 At Scott Street from Creston to Airport, the contractor is 85-percent complete with the concrete portion of the project. In addition to the 40 plus curb ramps to be upgraded to current ADA standards, the council also directed staff to install concrete sidewalks and curbs and gutter around the dirt lot at the northwest corner of Scott and Commerce. By doing this, the “path of travel” around this neighborhood would be complete. The contractor will now begin work to remove and replace deteriorated portions of the median curbs from Westfield to Airport.

Once all concrete work is complete, then the surface grinding and paving of the road would follow.

The city is also improving drainage at three different locations:

· Remove debris from a 24-inch pipe located west of 21st Street by Villa
· Remove and replace an existing collapsed 18-inch storm drain pipe in an easement west of Oak at Arleen
· Install concrete cross-gutters, improve curb ramps and curbs and gutter at 18th and Riverside

As per attached, the debris clean-up of the pipe at 21st Street is complete and the work at 18th and Riverside is in progress.